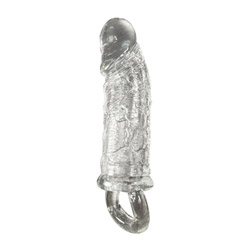 Not for the sensitive vagina.

I really wish it was either smaller near the head or softer. As it is, it's very hard and large around the head and it hurts when inserted, but this may also be due to my general sensitivity in this region.
Pros:
Large, size, color, materials
Cons:
Too big, too hard, too cold.
Rating by reviewer:
3
useful review
The view of the toy is striking, honestly. My boyfriend doesn't think it's that big, but I think it looks unnaturally gargantuan. My curiosity definitely got the better of me when he first brought it out. This massive thing that looks like an ice penis coming towards you. It locks on well, my boyfriend and I never had an issue with it coming off, or sliding off. He does not like to use the ball strap because he thinks it's too small. It's made of high-quality stuff. Doesn't smell weird, and to the touch feels not too soft, but not too hard. We use Astroglide with it, and it seems to work quite well.

I'm not a size queen; I actually prefer smaller toys... But my boyfriend wanted to try this out, so we did. Maybe it's the flare at the head, but something about this toy is unusually hard when inserted, and not in a good way. I usually tell my boyfriend that it hurts, because it does, but just that one spot. It's very, very hard around the head, and I don't actually have a good time when using it. It's also pretty slow to warm up and is freezzinggggg cold when first inserted, and for a solid two minutes afterward.

Although my boyfriend loves it and tries to use it more often than I would really like to- I don't find this one enjoyable. Admittedly, I'm quite small down there, and pretty sensitive, so if you have a female spot that is a fan of larger, blunter objects with no give, or even a fan of ripples then this might be the product for you. Personally, I'd like something a little softer, maybe with more give and squish that feels like skin, and not like plastic. Maybe in the future I'll warm up to this toy. For now, I consider it a fail.
This content is the opinion of the submitting contributor and is not endorsed by EdenFantasys.com