While it's certainly not the best masturbator out there, the Triple suction stroker performs well, and is a great purchase for those just introduced to male sex toys.
Pros:
Great variety of stimulation, can be used in the shower, adds intensity to solo or couples' play
Cons:
Can be difficult to clean completely
Rating by reviewer:
4
extremely useful review

This toy is made of TPE, the benefit of which is that this toy is stretchy, but returns to its original size and shape. It is very squishy, which means you can adjust your grip to provide a greater or looser fit--which means more or less direct stimulation on your member.

The toy has no taste or smell, and isn't hard to hold during play, even with lubed-up hands!

The design suits Mr. Awkword perfectly--he really enjoys the suction and particularly likes the ribbed chamber in the middle. He seems to be just about the perfect length to fit himself inside the toy without having to stretch it much, but it should be mostly accommodating for an average length and girth. But be warned, large fellas: this toy does seem a bit flimsy, and may only stretch so far before breaking.

In terms of appearance, I'd say at first glance it simply looks like a dog toy, so it may be relatively easy to hide in plain sight (assuming you have a dog, of course!). I would not personally travel with this toy, if only because it is a lint and dirt magnet; even just taking pictures with it seemed to attract every stray bit of dog hair in the room! It also might get squished easily in a suitcase or travel bag, so it might be best to just leave it at home.

The Triple suction stroker works great whether it is used alone or with a partner. The toy did seem to fill up with air, which made it a bit difficult to fully stroke Mr. Awkword; we had to squeeze some air out a few times, which made a less-than-sexy noise upon exit. However, such is the price of good suction; and if there's one thing this toy does right, it's sucking.

This stroker is waterproof and can be used in the shower, which my fiance takes full advantage of. It works much the same in the water as it does anywhere else.

TPE is rated a 7 on the material safety scale, and a few precautions should be taken when using it. Eden recommends using condoms when sharing this toy with someone else, since TPE is slightly porous. It also cannot be boiled.

My fiance rinsed it out (thinking that was good enough), but I could tell there was still some semen and lubricant left inside because of the smell. I poured in a few drops of liquid soap and ran it under the faucet, as well as using the sprayer from my sink as a sort of pressure washer. I massaged it from the outside to make sure I got soap and water between all the little nubs and ribs, then rinsed it well.

The single-entry hole works well for creating suction, but it does unfortunately make it a bit harder to clean than some of our other toys.

The Triple suction stroker came in a box, which included its features in not-so-subtle language. 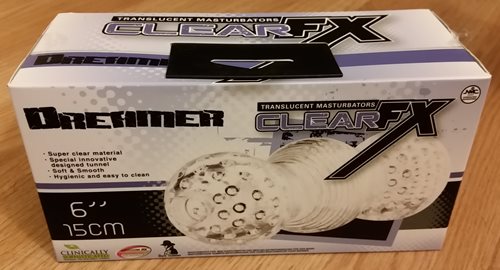 The toy also sat inside a molded plastic sleeve. 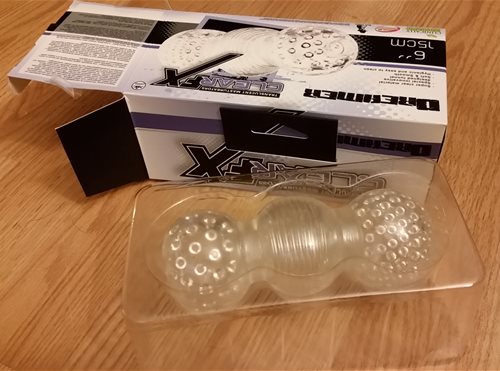 We are planning on keeping the toy in its original box, so it can definitely be used for storage, or wrapped up as-is in order to give the toy as a present.

We purchased this toy in the past, but it broke due to no fault of the toy itself--my fiance used to turn it inside-out in order to clean it (which, as I've said, can be difficult to remove every last trace of fluids), and one day the toy just ripped. TPE has its limits, and though he took it to the extreme, I would still be wary of using this if you are very well-endowed.

However, my fiance has used it both in and out of the shower, as well with both him and myself at the wheel, so to speak. It's never let us down!
This content is the opinion of the submitting contributor and is not endorsed by EdenFantasys.com

Reviewed by The Awkword Lover (Eden Writer) May my fumblings amuse and entertain!
Rank
5.8
wrote 12 reviews
This review was edited by
Comments
Make a post
Forum
No discussions yet.
Thank you for viewing Triple suction stroker – penis stroker review page!
Top