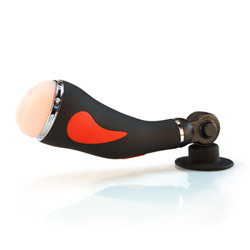 My man has sort of an arsenal of masturbators that we have collected over the years. Now, I'll admit, he's pretty easy to please, and when I placed the order for this I hesitated because he already has a "handsfree" version that mimics this closely. I was pleasantly surprised when this toy became his new favorite! He adores the vibrating feature (much to my surprise) and it has been his go-to recently, despite its few flaws. It's a excellent effort by Eden for a masturbator, and you need one!
Pros
+ Vibrating, and in a way that he likes!
+ Changeable bottom, suction cup and regular
Cons
- somewhat heavy
- Bulky design
- Not going to fit everyone
Rating by reviewer:
4
extremely useful review

Although I am a lady, I am a huge fan of male masturbators, because realistically, they make my life a lot easier. As much as I love intimacy with my man, there are days where I am not feeling it, I don't have time, or I just want to change things up in the bedroom (or bathroom). All of those are GREAT times to grab something like the Eden Handsfree Masturbator. Plus, the unique suction cup bottom allows for a truly handsfree experience if you're a dude grabbing the masturbator for solo time.

Overall this totally awesome, vibrating toy is worth the buy for any man seeking something a little different, or any woman who wants a quick, easy way to get their man off.

The "sleeve" of this product is made of a TPR material, which is a 7 on the Eden safety scale. It's similar to cyberskin, but slightly less porous. If you have any experience with the Tenga Flip Hole, it's the same material they use. It does not retain heat as well as the Fleshlight line, and doesn't feel quite as soft, but the material tends to get significantly less sticky. This material is also compatible with silicone based lubricant (as well as water based) which is a useful bonus, as the suction base on this toy is perfect for the shower.

The casing is made of a hard ASB plastic. This plastic has some seams, but they cannot be felt during use. I will note that the way this toy is made it is a little heavier than Tenga Fliphole or the Flight series by Fleshlight.

Beginners to advanced toy users can enjoy this toy.

The Eden Vibrating Masturbator design has a few flaws from my own female perspective. For example, it's slightly curved, which great if you're using this solo and have big triceps, but the curvy design and the placement of the buttons for the vibration are something I fumble through a little when I am the one operating the machine. That being said, if you are going to use this as a truly "handsfree" option, the curve is perfectly well thought out and actually serves as a benefit. Also, if you plan on using this masturbator as "handsfree" the controls are very conveniently located. As a whole, the design is well thought out for the purpose of the toy, but causes a little trouble when you don't have it mounted to the wall or a desk.

I really love that Eden thought out putting in an interchangeable bottom. There's the suction bottom (for hands free use) as well as a small little cap for when you're using it manually. The little downfall here is that no matter how tightly you seal the bottom, a small amount of water can get into the battery compartment. That being said, it's a VERY small amount of water. If you take the extra step of removing the bottom and checking the compartment after cleaning, you won't have too much of a problem. My personal suggestion is to remove the batteries during cleaning, put the lid back on the bottom, and then proceed as usual.

The suction cup works pretty stinking well. It stays on different surfaces, such as shower walls, desks, and glass tops. It also sports a push button that allows you to change the angle that the toy sits at, TOTAL BONUS.

The toy, with the the suction bottom and lid on, measures a whopping 13 inches. The things is giant! The removable sleeve, however, is a tiny six inches. My man touches the back of the toy during use, but it doesn't bother him too badly. If you are ridiculously impressive down there, you might want to steer clear of this one because you will find it a little small.

The vibration feature of this toy makes it a home run. Read about the Functions and Controls to learn about that.

The functions of this toy are operated by a power button, as well as a button that cycles through the vibrations. Each time your push the vibration button, you get a different pattern. The vibration has so many different options, I totally lost count. I think there's like 30 different features ranging from solid vibrations to pulsating and patterns all at different intensities! My man RAVES about the vibration feature, which I really didn't think he would like. He says it's different than anything he's ever felt, and we've had a lot of fun experiencing with all the options.

This toy performs well in the shower, but as mentioned previously, you do have to be sure to let this toy dry out after use in the water. Do not submerge. It's more of a "splash resistant" toy.

Beware, the vibrations are a little loud. Likely to be heard through a closed door across the hallway. However, you can't hear them at all if the shower is running. Our shower is right off our bedroom, and I don't hear this thing at all if my man is using it in the shower and I am in bed.

This material is compatible with silicone or water based lubricant. Personally, I prefer the easy clean up of water based, but to each their own. The sleeve is removable, so you can pull it out, rinse it with warm water and then clean with you favorite toy cleaner or mild soap. After we remove and clean the sleeve and allow it to dry completely before returning it to the plastic casing, we begin to clean the plastic casing. When I clean the casing, I pop out the batteries, and then re-secure the bottom of the toy before cleaning it with warm water and a mild soap. My man, however, doesn't bother to do this and it hasn't ruined the toy yet! Store your masturbator sleeve with the casing, with the lid on, in a mild temperature room for it to have the longest lifetime possible.

If you haven't yet ordered an Eden toy, please note that you will be receiving it in minimal packaging (usually just a brown box, and a plastic baggie type thing over the top of the toy, and probably no instructions). It may not be what you expect if you are a real luxury toy lover, but it's part of how they keep their luxury line so affordable! You'll easily be able to toss the packaging in the recycling and get right to experiencing your toy.

I honestly wasn't expecting for my man to love this toy as much as he did. His other "handsfree" device is the Spider Realism Handsfree masturbator, and that has been his favorite for years and years. He mentions that the Eden Handsfree isn't as "tight" or "textured" as some of his other toys, but the vibration makes it unique and fun to use.

I am please with the design of this toy as a handsfree device, but my girly hands find the toy a little bulky and heavy in comparison to some of the other things in our toy box when it comes to manual use. That being said, the vibration can make my job pretty efficient, and I suppose I can't complain about a little tricep workout!

As a whole, Eden thoughtfully designed a stellar handsfree toy at a reasonable price point, and I would totally recommend it to anyone, that is, if my man doesn't recommend it first!
This product was provided free of charge to the reviewer. This review is in compliance with the FTC guidelines.