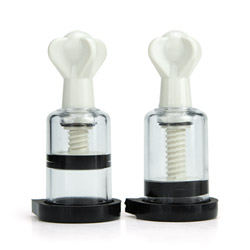 The Best Kind of Suck!

Overall, I recommend this toy. This was my first adventure in electro-stimulation, and while I did find it intense at first, I found this toy too enticing to put down for long. If you're a fan of nipple stimulation of any kind (sucking, flicking, vibrations), then I suggest you invest in this toy and the ePlay Electro-Stim controller.
Pros:
Creates pleasant sensations with and without ePlay remote, easy to maintain
Cons:
Difficult to maintain suction, poorly-designed plugins for ePlay controller
Rating by reviewer:
3
extremely useful review

The ePlay Nipple Suckers are meant to be used to stimulate the nipples, both through a sucking sensation from suction as well as electro-stimulation from the accompanying ePlay Electro-Stim controller. This toy is perfect for the man or woman who enjoys nipple stimulation but wants a no-touch experience.

The nipple suckers are primarily made of PU coated plastic, which ranks at 7 out of 10 on the material safety scale. This means they are safe and easy to clean. Around the edge of the nipple suckers is a rubbery material which helps to create suction. The texture is nice and does help in the process of electro-stimulation. I did not notice any smell from the suckers.

The design for the most part is simple, but well-done. The nipple suckers do as they are supposed to, and are easy to figure out. They do seem a bit large, however, and when laying on my back, I find it difficult to keep both suckers at an upright angle to ensure they don't lose suction or slip--I definitely can't see much use of these in seated or standing positions.

I also found that how the ePlay controller connects to the suckers to be lacking. The male connector from the controller slides into the rubbery ring around the edge, but it doesn't actually plug into anything. Rather, it simply touches the edge of the sucker, which then conducts electricity from the controller. However, if you try to "plug" it improperly, it breaks the seal of the rubbery part from the skin, which can be a bit frustrating when trying to adjust position. It requires a bit of adjustment that can be a bit frustrating. It helps to have someone else there as well when plugging things in.

Overall, the product functions as intended. I personally found the "Massage" function to be too intense, even on low strength. This was my first time using electro-stimulation, so it could just be something that I need to work up to.

My main complaint with function is how the cords attach to the suckers themselves: the fact that they don't actually plug into anything, but merely touch the edge of the sucker to conduct electricity seems sloppy to me. It doesn't seem very secure, as it's easy to dislodge the cords as a result. It works, but it could surely work better.

Taking care of the ePlay Nipple Suckers should be simple. Other than lubricant for aiding in suction, there shouldn't be much mess involved in using these, and warm water with soap should be enough to keep these clean. My only complaint has to do with lubricant which can enter the chamber behind the suction mechanism, but even this isn't much of an issue. As for storage, I simply unplug the suckers and keep them in my drawer along with my other toys.
This product was provided free of charge to the reviewer. This review is in compliance with the FTC guidelines.