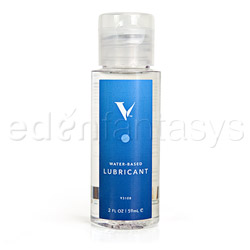 Other V water based lubricant reviews

Gone in (Less Than) Sixty Seconds

Despite being advertised as natural feeling and long lasting, this lubricant was a complete and total fail for me. I tried it in several situations and no matter how I used it, it was gone in a matter of seconds; completely dissolved into the skin, leaving no slickness or residue behind whatsoever. This, in conjunction with a chemical odor and glycerin as an ingredient, make this a product I honestly would not recommend to anyone.
Pros:
Can be used on all toy materials
Cons:
Small bottle, way too thin, chemical smell, contains glycerin
Rating by reviewer:
1
extremely useful review
When I saw a new water based lubricant hit the "shelves" at EF, I had to try it. I like to have a broad range of products that can be used with all of my toys. This lube, however, is one I will not be using again. It is advertised as long lasting and silky feeling, but I noticed neither of those.

The lube comes in a small clear bottle with a flip open lid and a blue label on the front. It says lubricant on the front but the lettering is very small and there are no images on the bottle, making it fairly elegant looking. The back label describes the lubricant and lists the ingredients as: purified water, propylene glycol, glycerin, hydroxyethylcellulose, and Honeysuckle extract. For those sensitive to glycerin, this is obviously not the product for them. The bottle only comes in this 2 ounce size as far as I know, which is on the small side, but I'm OK with that since I won't be using the rest of it anyway. If I liked the product, I would hope it would come in a larger bottle because this size would be easy to go through quickly.

When I received the bottle, the first thing that struck me is how thin the product looked through the clear bottle. When you swish the bottle from side to side, the lubricant looks only slightly thicker than water. Once I flipped open the cap and turned the bottle upside down, the lube comes out quickly and easily, without so much as even squeezing the bottle. The product also has a moderately noticeable chemical scent to it - almost like a cleaning product. I tasted it off of my skin, for testing's sake, and it is slightly bitter but otherwise not noticeable.

The issue with this lubricant is that it simply doesn't lubricate. First off, when it comes out of the bottle it is runny and thin and doesn't stay where you put it. It does feel slick initially, almost like a massage oil, but that feeling is gone within seconds. Secondly, it gets sticky in seconds and is absolutely gone in under a minute, no matter how much you use. To test it at first, I put one drop on my hand and rubbed it in. It became sticky after 6 seconds and was completely gone after 9. It didn't leave any residue or feeling on my skin at all though, meaning there was really nothing to wash off. It is advertised as being natural-feeling, but it really never lasted long enough during any use for me to get a good feel of it to find out if that's true. It is slick at first, but gone so fast that I really can't vouch for natural or unnatural. The product, as noted above, includes Honeysuckle extract, which I believe is intended as a moisturizing aide, but I don't notice any such effect.

Unfortunately this product is really useless for me. It's a lubricant that doesn't lubricate. In order to be considered even a decent lube by me, it would have to be thicker, longer lasting, and have no chemical smell. And while I have no issue with glycerin, that ingredient alone makes this a big 'no' for many people. If I cold have given this product no stars instead of one, I would have. It is simply nothing that it claims to be.
Experience
I've tried this product on toys and for skin to skin contact and while I had no adverse reaction to it, the product was simply gone in less than 30 seconds.
Follow-up commentary   I still don't like it 21 months after original review
I never really had a reason to use this lube much more. It didn't change and with so many better options out there, it just wasn't worth going back to.
This content is the opinion of the submitting contributor and is not endorsed by EdenFantasys.com