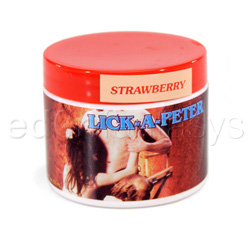 I was really disappointed in the product. It was initially bought as a gag gift and would work for that but to use as a "real" product, I would not recommend it.
Pros:
I can't really think of anything positive to say about this product.
Cons:
It has a nasty taste, is runny, and slid off on to the sheets.
Rating by reviewer:
1
useful review
I ordered Lick a Peter Strawberry Gel|Lick a peter-strawberry as part of a gift basket for my hubby. I noticed it when I saw it came in strawberry flavor, which is one of my favorite flavors. When it arrived, the jar was small but the labeling was interesting. I got this more for me than him as I am not a big fan of giving oral sex. I thought this might be the thing to help me get past my problem with it.

When I gave hubby his basket, he eagerly went through everything in and when he got to this jar, he held it up and just smiled at me. That wicked smile had me wondering just how long it would be before he tried it out. Needless to say, it wasn’t long. We both took a day off from work to try out all his new toys. And I must say that his basket had a lot to try out!

When we opened this jar, I thought it was a little runny. I know it is a gel but it just seemed a little too runny to me. When I first went to put some on him, I made a mess! It dripped across the bed, on his leg, and everywhere in between. When I did get some on his dick, it didn’t stay where I put it and just slid down onto the sheet. I was pretty disappointed at this point. I decided to go ahead and give it a try since it was his birthday and he enjoys me giving him blowjobs. When I first tasted it, I about gagged. It was a nasty taste and felt slimy in my mouth.

Afterwards, we both gave our opinions of the gels. I had also gotten him the Lick a Pussy gel|Lick a pussy-strawberry and we both used them during this adventure. The feelings were mutual in that neither of us were fond of the taste. The gels were runny and didn’t stay where we wanted them to stay. We decided that this is the same product just put in different jars. Although he was not overly disappointed with the Lick a Pussy, I was disappointed with the Lick a Peter gel. This is definitely not the “cure” for my reluctance that I had hoped it would be.

Overall, this gel only gets 1 star from us. I was disappointed and although he didn’t say it, I think hubby was disappointed in it too. It was cheap enough and I got it as a gag gift but I wouldn’t recommend it if you are looking for something useful and effective.
Follow-up commentary 13 months after original review
This is one of those lubes that ended up in the trash can not long after arriving. It wasn't worth messing with. I will never order it again. It is not sugar free either.
This content is the opinion of the submitting contributor and is not endorsed by EdenFantasys.com