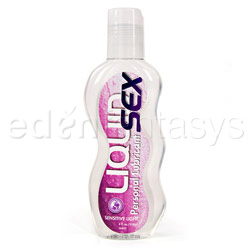 So, when the bottle arrived, I took my new lube for a test ride. I sniffed it, managed to spill it all over one hand, and tasted it; while not labeled as edible, things do happen in the middle of sex. The lube has a faintly unpleasant smell that I am hard-pressed to describe: it might be best stated as “vaguely chemical.” Still, as I rubbed it all over my hand, I noted that it felt like, well, me! It grew slightly tacky as it dried, but once dry it felt as if I’d just had a little bit of moisturizer on my hand; it didn’t rub or “flake” off unpleasantly. This was definitely a plus – no gross “flaking stuff” post-orgasm!

Reviewed by Ariane (Eden Advanced reviewer) Some of those staid academics you meet are really sex pots on the inside!
Rank
5.3
wrote 30 reviews
Comments
Make a post
Forum
No discussions yet.
Thank you for viewing Liquid sex sensitive light – lubricant review page!
Top