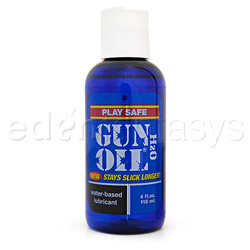 Only if you want a sticky gun

Gun oil is decently thick, and contains lots of natural ingredients like guarana and ginseng. It's glycerin free, which is always a plus. It's got aspartame tucked in it as well, so that sort of cancels out the pluses. A lot of folks have issues with aspartame reactions.

The lube is pretty much odorless, but it's slightly bitter and odd tasting; which is likely why they added the aspartame, to negate some of that. I'm certainly not going to be using this for blow jobs any time soon.

The packaging is nice. Taylor actually likes it, as opposed to some of the more girly stuff which makes sense, as it's marketed towards men. He's used it with his sleeves and Fleshlight and, for that purpose, it seems to work fine. It's ok. Decent. Fair. It doesn't stand out, but it's not the worst he's jerked off with. However...

I use lube cuz I'm an old broad, who doesn't make enough of my own, so having to reapply or add water just sort of sucks. With a good water based lube, I don't have to do that; it lasts long enough that my body catches up. With Gun Oil, I was constantly adding more.

At twenty dollars, for 8 oz., I find this to be a major fail. The flip top cap is nice. The bottle is manly. It's okay for him, but it sucks for me. I'd rather buy something that works for us both.
Follow-up commentary   I still don't like it 2 months after original review
Still not overly fond of this lube, though Taylor will use it with his strokers. For me, it just gets too sticky and flaky. It makes me wonder if I got a bad bottle, because it normally gets overwhelmingly good reviews. Odd. Odd, odd, odd.
This content is the opinion of the submitting contributor and is not endorsed by EdenFantasys.com

Reviewed by Carrie Ann (Eden Writer) "What after all is a halo? It's only one more thing to keep clean." ~Christopher Frey
Rank
7.1
wrote 328 reviews
Comments
Make a post
Forum
No discussions yet.
Thank you for viewing Gun oil H2O – lubricant review page!
Top