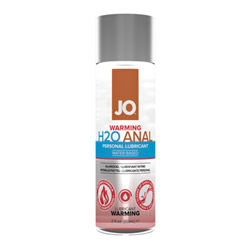 So if you have any known allergies or sensitivities to the above ingredients I suggest you skip right by this product.

Other than that, since this is a water-based lubricant it is safe to use with all manner of toys, be they silicone, latex, plastic or any other material.

Since this is a water-based lube it's runny and, well, watery. In fact, the first time I tried to pour this lube I ended up with lube all over both of my hands and dribbled down a fairly good portion my thighs. What a disaster! I think I may have been just a little too enthusiastic with the bottle since I was used to more jelly-like water based lubricants. Oddly enough, the second time I tried to get the lube out of the bottle I found that it didn't pour as easily as I would have liked and that one really does have to try and squeeze this bottle to get anything out (and, if you're already covered in lube, this can be quite the task.)

Since I had already made a botch mess of opening up the lubricant I tried rubbing it into the skin on my thighs and, while initially vaguely oily and sticky, I found this lubricant dried fairly quickly and left my skin feeling pleasantly baby-soft! I did not feel the need to wash it off once a minute or two had passed.

I can say that I found this lubricant to be very slick and sufficient for anal play. One thing I notably did not feel, however, was warming. I don't know if I'm just not sensitive enough or what, but I put this lube on several parts of my body--my inner wrists, my thighs, my anus, my clit--and got nada. Not even the faintest hint of warming was to be felt. I even tried blowing on this lubricant at the suggestion of several Eden Fantasys veterans and still got nothing. Though, I probably shouldn't have been surprised since the bottle itself boasts that it, 'warms on contact without blowing.'

I found that this lubricant has a faintly peppermint scent to it, similar to a very watered-down Icy Hot. It's not overpowering in the least, however, and quickly vanishes after exposure to the air for approximately one minute.

Its taste, when freshly applied, tastes a little like a mild spearmint gum.

I haven't tried this lubricant on another person during oral but I suspect that it would not be unpleasant since the taste is incredibly mild.

As I mentioned above, I really couldn't feel the warming sensations in this particular lubricant, but other reviewers have so I imagine it's just one of those things where you'll have to try it and see. Having said that, I still think this lube is a good purchase for those interested in anal play. It is a very slick, thin lubricant, and just a little bit of it went a long way. All-in-all it performed well, if not quite as intended. For me, JO H20 didn't 'stay warm on contact' as promised on the bottle. Nor do I consider it my 'new best friend,' (also advertised). It is effective, easy to clean with soap and water, and a lubricant I don't regret buying.

The bottle I have (75mL/2.5 fl. oz.) is small and convenient enough for travel, though the rigid plastic construction of it make it slightly difficult to squeeze. It can be easily opened with one hand, though I make no promises if your hand is already slick with lube.

I used this lubricant with several different shapes and sizes of plugs and found that it suited my needs just fine, though it decidedly lacked a warming effect. JO H20 made for easy and clean insertion once I got used to the thinner consistency.
Follow-up commentary   I still like it 3 months after original review
Even though it doesn't warm for me at all it still is a pretty decent lubricant, and I probably would get it again for anal play. A little bit also goes a long way, so I don't know when I'll need to buy a new bottle. That's always a plus.
This product was provided at a discounted price in exchange for an unbiased review. This review is in compliance with the FTC guidelines.