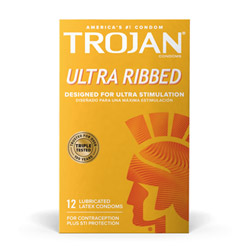 Ultra Ribbed, but Not Enough

These condoms are worth the money when considering a safe and reliable contraceptive. These can be a fun and safe way of preventing pregnancy. I would say that the ribbed texture could be better, but these were a great alternative to the regular condoms.
Pros:
Lubricated, easy to use,
Cons:
Bad smell, bad taste, not enough ribbed texture
Rating by reviewer:
4
extremely useful review
The Trojan Ultra Ribbed Lubricated Condoms, although in a trusted and well loved brand in our household, did not live up to its ultra ribbed name. These condoms worked in protecting from pregnancy, but the ribbed texture was just not enough for us to really feel any more than a traditional condom. These came in foil wrappers as always and had plenty of lubrication inside. They do smell, as many do, like lattes or a rubber-like smell. The lubrication on these does nothing for taste either. It is a very chemical-like taste that I did not care for at all. Again, these condoms worked just fine for contraceptive purposes! We were just disappointed in the ribbed for pleasure aspect. They just were not enough to make a difference in the pleasure of using a condom. Since condoms can kill the mood at times, I would reccomend the ease of putting these on and being ready to go be sure of the lubrication that comes already with these. It did not irritate my skin on the outside or inside either, which is always a plus

With the ribbed texture being why we bought these, it was dissapointing that it did not seem to make a difference in how either of us felt while doing the deed. These had a regular fit for the average man, and we had no problems with slipping or coming off. We also had no problems with tearing or breaking. With that in mind, these condoms worked great! There were no defects with any of rubbers and each worked just as well as the last.

This condom was a fun try but did not do anything for either one of us. I could not feel the ultra ribbing any more than any other condom. The lubrication made slidding it on easier and allowed us both to be ready to go immediately. I would recommend these for contraceptive use, but the smell, taste, and feel of these condoms are just as nice as most of regular textured, of lack there of, rubbers that we've used. I would say to give it a try and see how it works for you, but it is not for people who are allergic to latex. The lubricant did not irritate my skin, but be aware that it is there before using. Some lubricants can be very irritating to sensitive areas.

Overall, these did what they were supposed to in the aspect of contraceptive, the ribbed texture did nothing for my husband and I. I would recommend using them for a fun time, but be aware of the materials that come along with using lubricated latex condoms.
Experience
These were easy enough to use and there was more lubrication than some "regular" condoms we have used in the past. We were both pleased with the look of these condoms while on. Although they looked nice, the latex smell was very strong as well as a chemical taste. The ribbed texture also was not strong enough to make a difference.
This content is the opinion of the submitting contributor and is not endorsed by EdenFantasys.com