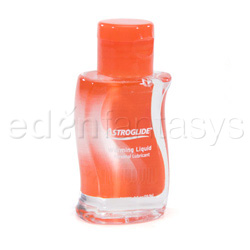 Warmth to be Desired

Astroglide's Warming Liquid was extremely disappointing due to its inability to stay warm longer than 30 seconds, but may be appealing to some who are experimenting with warming lubes.
Pros:
Quality lube, good to start with.
Cons:
Warmth doesn't last long, not worth it.
Rating by reviewer:
2
useful review
I bought Astroglide's Warming Liquid because I was curious to try something warming, and the overall consensus that I had read online was that it was the perfect level of warming. Not too little, and certainly not burning. (The horror stories I read online about other warming lubes made this one seem much safer.) But I was really disappointed when I tried it myself.

I love the lube itself, don't get me wrong. It's a water-based, great consistency and doesn't get too sticky or dry out very quickly, and those are obviously important characteristics. It also doesn't have any strong scents or tastes. I enjoyed using it during foreplay and sex, as the consistency was great for both. But, as the name implies, it is intended to be warming, and in that sense, it just fell short.

When I used it myself, I could feel the warmth for about 30 seconds to 1 minute, and then the sensation would disappear. Originally, I thought maybe that I had just grown used to it, but when I applied more, the same thing happened. Sadly, the warmth just doesn't last.

Later, when I used it with my boyfriend, he didn't even notice. He had no idea that it was warming because he felt nothing at all.

Overall, if this product didn't advertise as warming, it would be great. Astroglide has proved before that it can make quality lubes. But their warming liquid was very disappointing, and didn't last like it should.

The one thing I will say is that it was a good warming lube to try first. It isn't very expensive and is widely available, and from this lube, my boyfriend and I were able to gauge our sensitivity to see what we could handle and what we'd like to try next.
Follow-up commentary   I still don't like it 8 months after original review
This lubricant didn't satisfy me when I first tried it, and though I've tried to use it since then, I've given up. Though it's perfectly fine as a regular lube, the fact that it's marketed as warming is misleading. For me personally, the warming level is barely noticeable. This Astroglide lube now sits at the bottom of my toy box.
This content is the opinion of the submitting contributor and is not endorsed by EdenFantasys.com