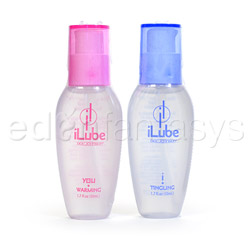 Wasn't I supposed to feel warm and tingly?

It seems a little unfair to rate a good lube only two stars, but what can I say? It didn't do what I had bought it for, which was to add sensation. You could find a lube that's just as good for less money, and won't disappoint you when it fails to deliver. As a warming lube it's so mild, you could just add more and more of it and never feel more than a slight warmth. As a tingling lube, it only works ever so slightly for anal. So for those reasons, I can't give it a higher rating.
Pros:
Feels natural
Not sticky
Doesn't dry out quickly
Cons:
It didn't warm or tingle at all for me.
Overpriced
Rating by reviewer:
2
extremely useful review

iLubeYou+i is a couple's lubricant by Doc Johnson. A "his and hers" duo of lube, this product had me really excited, and I'd had my eye on it for a while. The "you" lubricant, or hers, is supposed to cause a warming sensation. The "I" lube, which is for him, is supposed to cause a tingling sensation. Used together during sex, fireworks are supposed to emit from your fused crotches, so to speak. Mind you, I said they are supposed to do these things. Unfortunately, they are so incredibly mild that I felt nothing but disappointment while giving them a try. As plain old lube, they work just fine; neither one is sticky, they are long lasting and don't dry up quickly. Since they are water based they are versatile enough to be used with silicone toys and latex condoms, they work just fine as anal or vaginal lubrication, and they absorb right into the sheets or lingerie with ease, leaving behind no stains or residue. This is all well and good, but my reason for making this purchase was that I wanted to try out arousal lubes because I never have before, and have always thought they sounded like a lot of fun. Well, perhaps these two little bottles can rock your world, but for me, they were completely underwhelming.

Both lubes are completely odorless, which is something I prefer in a lube, considering I like the scent of sex in the air, not chemical strawberries and flowers. Each one does have a slight taste, which is actually not too bad. If you have issues enjoying giving oral sex, these lubes do add a sweet flavor that is hard for me to describe other than their sweetness, so they could be used for oral sex if you so desire. When I daubed a bit of each lube on my tongue, I finally got to experience the warming and tingling sensation that the product is supposed to give off. The warming one did warm on my tongue, and the tingling one, which is a bit minty, did give my tongue a bit of a tingle. Neither one tasted too much like chemicals like some lubes can, so that was a plus for a product that could use all the pluses it can get.

So, now that I've pointed out all the things that this couple's lube has going for it, let's talk about its issues: they don't do what they say they do! At least, they didn't do much of anything for me. Since this is my first try at using arousal lubricants, I can't say that they just aren't for me yet, though it's clear that this product is not for me. Everyone is different though, and our anatomies and degree of sensitivity down there can vary wildly, so perhaps it could work out for some of you. After all, other reviewers have gushed about these lubes, so if you want to take a chance on it, go for it. Just know that it might be a disappointment by failing to deliver the sensations that they are supposed to deliver.

Also, since my guy lives on the other side of the world, I wasn't able to try these out with anyone—just me, myself, and my vibrator. I tried each one individually and combined, internally, externally, vaginally and anally; no matter which way I cut it though, it just wasn't doing it for me. The warming one adds a slight warming sensation, and when I say slight, I do mean slight. Anally, the tingling one also gave a slight tingly sensation, but I was hoping for something less subtle. I'd love to try this out with my man when I see him in a couple of months and see if it makes a difference to have a warm, human body to share these with; I'll mention the experience in my follow up review. So far though, I'm not feeling hopeful. Even when used solo, a warming and tingling lubricant should do what it says it will do.

At the very least, it's easy to clean up once you're done. Along with leaving no stains on the sheets, they do eventually absorb into your skin, so you don't have to worry about clean up. The bottles are 1.7 fluid ounces each and store easily without leaking, which I suppose is another plus.
Follow-up commentary   I still don't like it 2 months after original review
It's not that I don't like this lube, because it's a fine lube that works rather well, just as that--it's good for vaginal or anal sex, has a nice consistency, it isn't sticky, nor does it need to be reapplied over and over again--it just didn't do for me what it claims to be able to do, which is tingle and warm. After using these with a partner, I can say that both bottles stand as good lubes, but neither one of us felt the tingling or warming sensation that the product claims to provide. So, if you're looking for some added sensation from your lubes, this product is probably going to be too mild for most people. If you want just a decent lube to get the job done? Well, there are cheaper products on the market that work just as well, if not better. I still stand beside my two star rating.
This content is the opinion of the submitting contributor and is not endorsed by EdenFantasys.com