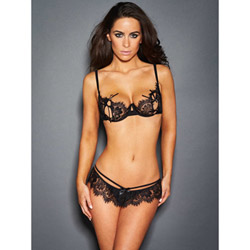 If you need a "one size fits most" bra/panty set that can adjust for larger breast sizes and offers some level of support this might be a great option for you. If you are like my girlfriend and small in stature with breasts that are well proportioned for a petite frame... this might offer too much space that won't be filled. The panty on its own is really nice as well.
Pros:
Adjustable bra size
Cons:
Doesn't work great for petite breasts
Rating by reviewer:
3
extremely useful review
This outfit has a very sexy panty number that my girlfriend really enjoyed wearing as well as the look of it; however, the bra that comes with this panty/bra set was not straight forward on how it works. It makes me laugh as this is the first time as a male I've had trouble figuring out how a bra works, but my girlfriend was equally perplexed. You can see the bra below: 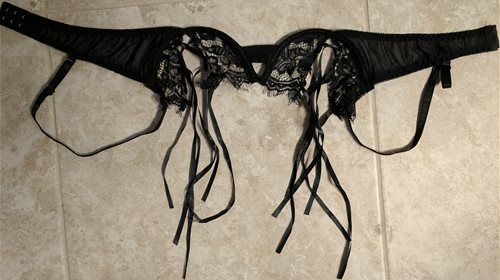 What was confusing was all the strings that are designed to tie over your breast to make the bra more adjustable to the cleavage you have. My girlfriend is very petite and has breasts that compliment her size, as such not filling out this bra as much as someone who is more cleavage endowed made the tie cords more confusing to their purpose. Even if fully tied together the lace that was tied together provided more coverage than my girlfriend needed, which resulted in a lot of loose fabric and long tie cords dangling from her breasts, which was not as successful as the panty in being seductive/sexy looking.

I think this bra/panty set would be better suited for women who have more cleavage, with the combination of an underwire & ample adjustable cup space. This is the way I can see this bra works being very welcome if my girlfriend had such needs.

The bra and panty set are made of mostly lace, but neither garment feature a laundry tag but based on the feel of the material I would recommend hand washing both articles and air drying them as they feel very delicate. The material didn't have that scratchy feel that most inexpensive lace has, which is good since it would be right up against your skin.

So bra aside, I really liked the way the panty looked on my girlfriend. The lace added a nice flare, but the little strings on either side begged for me to pull them down, which I found very enticing.
This product was provided free of charge to the reviewer. This review is in compliance with the FTC guidelines.