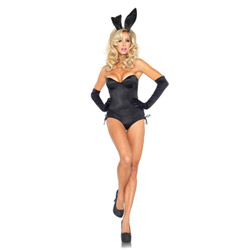 Lovely for standing still and posing, not a great long term bet for moving around a lot unless you're cool with your nipples being readily apparent. Aside from the plastic straps (and the tabs into which they fit inside the teddy), it's well constructed and comfortable. But those straps turn out to matter a lot.
Pros
flattering, comfortable, lovely details
Cons
virtually useless without the straps (which break easily) and is prone to causing wedgies
Rating by reviewer:
3
useful review
When worn with the invisible plastic straps, this piece is unstoppable. It looks spectacular, accentuating desirable curves and minimizing less-optimal ones. I was pleased that the cup shaping made it look like I have an actual rack. The material is high quality, smooth to the touch and the cut is comfortable to wear, even when moving around a lot.

But all that comes with a BIG caveat. Without the transparent plastic straps, this was a nightmare to wear. In any position but sitting still (or hunched over, I suppose), my nipples were ready to pop out constantly. Because of my long torso, I knew I would need big size, even though my waist and hips aren't that large. But it wasn't long enough.

Obviously the best solution is to just wear the straps. But that solution only works if the straps (and the plastic tabs to which they are inserted in the teddy) don't break incredibly easily. I bet you can guess where this is going. For all the great quality materials put into the teddy itself, the plastic holders are shoddy as anything I've ever seen. After a single wear, the one on the left side was broken irrevocably. If it were simply the straps themselves that broke (which seems likely to happen, given that they are cheap plastic), I would just replace them with straps for another bra or something similar. But the tabs themselves being broken means I have to whip out the sewing kit to make this wearable ever again.

Otherwise, it's a beautifully constructed piece with adorable details on the sides of the hips. I appreciated how incredibly easy it was a put on- zipper in the back that doesn't require a second set of hands- and to take off -unzip and voila! The fabric had a degree of flexibility that I feel like this would work equally as well on days when you're feeling scrawny and days when you're feeling a little bloaty.

Other than the straps issue, the only challenge I had with wearing the piece was the cut off the shorts. It's not quite a brief, not quite a boycut. So as I moved, the bottom tended to crawl up my cheeks and head towards wedgie land. But it wasn't uncomfortable, exactly: just less flattering.

The extras are nice touches too. The bunny ears and tail are adorable additions. Just take note that the black gloves shown in the picture are NOT included.
Follow-up commentary   I still like it 19 days after original review
I wish there was an option to say "it's still ok" because while this piece is still very full of promise and potential, the issue with the straps is insurmountable. Without the straps, the teddy slips down awkwardly and in unflattering ways. It's not just a matter of the boobs falling out, it's the bunching up in the back and the weird lines in the lower abdominal area that emerge when everything isn't being held in place. SO CLOSE to being awesome.
This product was provided free of charge to the reviewer. This review is in compliance with the FTC guidelines.