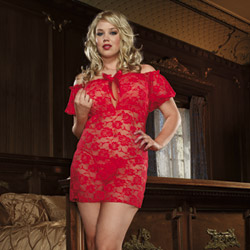 Red off the shoulder babydoll

Babydoll and panty set by DreamGirl

Other Red off the shoulder babydoll reviews

An off the shoulder babydoll is a sure sign of wood higher up. (Plus size)

I wore this set on Christmas morning, and it was well received by my audience (husband). It's very, very comfortable and very feminine and delicate without being overly frilly. The only areas with which I found fault were the bust (even though I prefer it the way it is), which didn't quite match the product page picture, the thong (I wasn't expecting it to fit anyhow), and a craftsmanship flaw that I was able to fix easily enough and probably only occurs in a very small number of instances.
Pros:
Easy to get on and off, Comfortable, Flattering, Adjustable sleeves, Lovely
Cons:
Thong doesn't fit well, Bust area isn't as it is on product page, SEWN TO ITSELF (see below)
Rating by reviewer:
4
extremely useful review

Came in a little box. Nice and simple. The set includes a babydoll and a thong. I immediately ripped the box apart and tried the set on......but something was wrong......

WHAT?! A tiny part of the edge of the top was sewn to a tiny part of the fabric where my right boob was supposed to go.....ok, this is the type of idiot thing I'd do if I tried to make my own lingerie. That's why I buy it instead of make it. Whatever, I was able to use a seam ripper to fix it, and now I can't even tell where it was. I'm reasonably certain that "being sewn to itself" doesn't come standard with this babydoll (that is, I'm sure most people won't have this problem), but I couldn't overlook that it had happened to mine, and I knocked it down a whole star for this reason.

I WOULD HAVE GIVEN THIS FIVE STARS HAD IT NOT BEEN FOR THIS. Moving on, after I fixed it....

Here's the babydoll, laid out. Notice that the bust area isn't as tall as it looks on the product page. I actually prefer it this way, but it seems to be a pretty big difference. Thought it was worth pointing out that there's much less coverage with the actual product. It's even more noticeable on the pics with me wearing it.
The underbust band is the part of the babydoll with the least amount of give. When putting it on(you can put it on over your head or pull it up like a skirt), I recommend the path of least resistance (whichever is smaller between your bust and your hips). If the smallest is 43 - 45 inches, it might be difficult to put the babydoll on without the underbust band giving you some grievance. If the path of least resistance is over 45 inches, this may be rather difficult to get on. My bust and hips both measure 42 inches, and it took very little effort on my part to make sure I didn't damage the underbust band.

I'd also like to note that the red is a warmer red than it appears on the product page.

There's a cute little bow on each sleeve. Also, this pic represents the actual color of the babydoll best.

I don't have a pic of me wearing just the thong, but it fits almost exactly like the thong from my Oh so sweet garter chemise review.

SO MUCH DIFFERENCE. I CAN'T EMPHASIZE THAT ENOUGH.

Obviously, the babydoll doesn't mind if the waist is a little smaller than the chart, or if someone is smaller than a D cup, but I don't see how someone would be able to put this on if BOTH their bust AND their Hips were over 50 inches (due solely to the underbust band, as the skirt and bust area would accommodate these measurements).

This view would be great on someone with an ass.

As is my custom, here is a side view.

90% nylon. 10% spandex. Hand wash in cold water and line dry. I mean it.
This content is the opinion of the submitting contributor and is not endorsed by EdenFantasys.com

My Red off the shoulder babydoll tags
About author

Reviewed by WhoopieDoo (Eden Advanced reviewer)
Rank
6.2
wrote 36 reviews
This review was edited by
Comments
Make a post
Forum
No discussions yet.
Thank you for viewing Red off the shoulder babydoll – babydoll and panty set review page!
Top