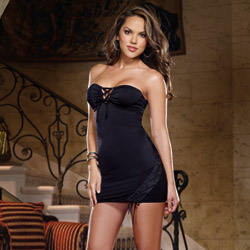 Curves ahead (and to the left, and right...)

This dress is super fun to wear in a situation where you are okay with looking like an outright sex bomb. It hugs just the right way, reveals a lot without giving it all away, and really enhances your shapeliness to the max. I could suggest some small improvements, but overall this piece is delightful.
Pros:
Enough coverage to wear as club wear, unique back design, body-smoothing and curve-flattering.
Cons:
Not ideal for small breasts, minor details could be improved.
Rating by reviewer:
4
extremely useful review
I'm not sure what's "French" about it, but this little number has curves in all the right places, as well as some unexpected ones!

I was delighted with the fit of this dress; it's form-fitting without being clingy. I ordered the medium as I usually wear size 6 tops and size 8 bottoms, A/B cup size (more on the A side lately), and I would say the French Curve fits true to its sizing chart. The dress was a very comfortable fit on bottom, and slightly loose on top - it would probably be better for a B/C cup, as the chart indicates.

You can adjust the fit somewhat by snugging up the strings in the back, but it would be difficult to accurately adjust one specific area (for example, making the top tighter and the bottom looser), as the strings slide easily through the D-rings and it can re-adjust itself as you move around.

There is not a lot of room for adjustment in the bra part, and no underwire or padding. For those of us on the under-endowed side, a little bit of help here would go a long way towards making the top stay up. It would be nice if the dress included one of those removable ties that often come with strapless dresses and bikini tops, which you hook on above the bra part at the front and tie behind your neck. 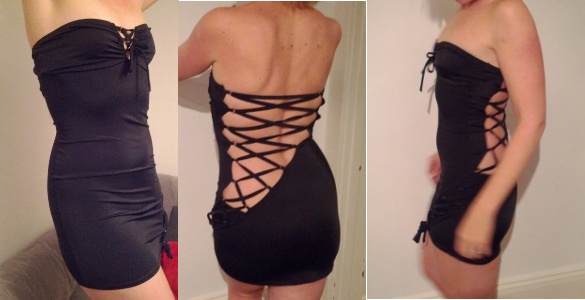 The length of this dress is 27" from the very top to the very bottom, which on my 5'9" frame makes it short, but long enough to be amply butt-covering. I did some test dancing in the dress (haven't taken it out to the club yet), and was happy that it didn't ride up very much. The only part I found myself frequently re-adjusting was the top, to keep it from slipping too low.

One of my favourite features of this dress is the asymetrical lacing at the back; it helps to elongate the look of your back, which ends up looking sexier than a plain open-backed dress. With the swoosh of the back opening, it creates a new curve where there was none before. A very nice way to join together the natural curves on the top and bottom!

The material is thick and elastic enough to skim over and smooth out the skin, like bathing suit material. I have some slinky dresses where I feel the need to wear tights underneath, just to get the smooth skin surface effect, and that's not the case here. The material might be a bit translucent in some light, but if you’re going for a sexy look you’re probably not too concerned about that.

Also, while there is no ruching, the criss-cross strings across the back have the effect of pulling the fabric in at points very slightly so that it is not entirely flush against the skin, which I found to have the same kind of flattering effect that a tiny bit of ruching does.

I like the D-rings anchoring the lacing. I’m still not entirely sure if they’re plastic painted to look like metal, or if the are in fact a lightweight metal, but in any case the metallic look is cool in my books, a bit edgier than fabric loops. The only improvement to suggest here would be a better quality of metal, such as stainless steel.
This product was provided free of charge to the reviewer. This review is in compliance with the FTC guidelines.