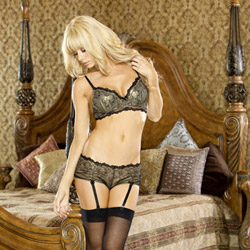 The Embroidery Bra and Garter Panty is a set that is lovely to look at and designed to be functional for everyday wear. Unfortunately the sizing of this set leave a lot to be desired as the garter panty is not likely to make it up the hips of most individuals and the bra runs large. Thus making this set built for someone who is top heavy and slender bottomed.
Pros
Beautiful Design
Push-Up Bra
Cotton Crotch
Cons
Panties Lack Stretch
Large Bra
Garters Non-Removable
Rating by reviewer:
3
extremely useful review
Overview
With exception to the Lace Back Chemise by Coquette I have the worst luck choosing monthly assignments. I feel awful reviewing a product and giving it 3 stars or less when Eden has been generous enough to send it to me. In an attempt to write something positive about one of my assignments I decided to choose something from a manufacturer that had yet to disappoint, Fantasy Lingerie. To be surefire I requested something that had been on my wishlist for 6 months, the Embroidery Bra and Garter Panty. Sadly the universe is laughing at me right now because this set disappoints.
Material and Texture
Bra
Both the bra and garter panty have tags that say they are made up of 100% nylon. While the back of the bra does feel like soft nylon the front looks and feels like a sturdy mesh. There is also a black lack trim along the front edges of the bra added for decoration. The bra cups are not made of nylon but rather a foamy material. I would say this is a quality product in terms of material, everything feels sturdy without being itchy or uncomfortable.
Garter Panty
As previously stated this is 100% nylon. The garter panty also has black lace trim at the top going all the way around the panty only to end where the lace-up portion of the back begins. Both the bra and panty seem to have a double layer of fabric. Both layers look like mesh with the outer layer black and the inner gold. This allows for the garment to have a sheer glow. As you can see from the pictures below there is a cotton crotch lining inside of the panty so that bacteria does not fester.

Design and Craftsmanship
Bra
I have many qualms when it comes to this set but I cannot deny the beauty of this bra. The is padding not only makes this bra eligible for everyday wear but since it’s also a push-up bra this was made to make your breasts feel extra luxurious. For those of you who might have held out hope that the straps were removable I must warn you that they are firmly attached and adjustable to your needs. For further adjustability there are three rows of eyes in the back which you can match to the hooks. The black lace trim is a loopy design that runs along the front edges of the bra as well as the tops of the bra cups. In the middle of the bra cups there is a small black bow that is attached to the garment but hardly noticeable. The stitching outside of the bra has the same black and gold color scheme as the rest of the bra. This design is more pronounced than the product picture and is not embossed into the bra but embroidered. Both of the cups have the same semi-loop stitching that seems to be like a mirror image of the other cup. In terms of the craftsmanship of the garment I would say that aside from one or two strings out of place this is a quality piece.
Panty
The embroidery of the panty is not as frequent nor as well aligned as it is with the bra. It goes all the way around the panty but only reaches 3 inches in length. There is some sporadic embroidery further down but nothing too noticeable as up top. I would to note that there is a seam in the middle of the panty that goes down to the crotch and up the back. Similarly to the bra there are four bows on the panty and they are slightly larger in size from their counterpart. These are stationed above the garters which are non-removable but you can adjust them. At the back of the panty there is a lace-up feature in the middle. It criss-crosses across the back four times and sewn in loops to help weave the provided string, which is not attached. This was designed for looks but given the lack of stretch this panty provides unlacing the back might be your only hope of getting these on.

Packaging and Cleaning
Packaging was nice and simple. The set came in a clear plastic back on a white, nondescript hanger. To clean the tag says to, “Machine wash warm gentle wash darks separately tumble dry low, remove promptly do not ring or twist.” The fabric of the panty might be too delicate to put in the machine so you probably want to hand wash it instead. As for the bra I would wager that if its washed with the delicates in cold water in a garment bag then hang dried it should be fine.

Following Fantasy Lingerie’s measurements I chose to order a size small although this is available in Small-Large. I have to say that there is something terribly wrong with the sizing of this set. First off I couldn’t even put these panties on to review properly. I cannot tell you how they felt once on or if the garters matched up with a pair of stockings correctly. Sadly there is no stretch to be found with this material and the only way to make any sort of loosening is to undo the back lacing. Even then these only made it 35 inches up my hips. As for the bra while the underwire was snug and the push-up bottom padding kept my breasts in place the top portion of the cups left too much room. I don’t know if this was because my breasts were supposed to reach higher and spill out of the bra but it didn’t work. As you can see from the pictures below I was able to fit another bra behind the Embroidery bra with no trouble due to the extra room. This bra is better fit for someone with a small D cup chest.
Likes and Dislikes
What I wasn’t so fond of
Obviously the sizing on this set was very disagreeable. I was really saddened by the fact that the panties wouldn’t even slide all the way up my hips. I thought about risking it anyway but the further up I went the tighter they got and I feared ripping them or having to use scissors to slice my way out later on. As for the bra I tried to convince myself I could still make it work to wear out but as I was getting dressed the evening I planned on doing so I found myself uncomfortable with the looseness of the cups.
What I liked
This is one of the most beautiful bra and panty sets I will never be able to wear. I am going to attempt to find them a new home. Probably separately since I don’t know anyone with itty bitty hips and large breasts. Aside from the loops placed at the laced up portion of the panty, which I don’t think are strong enough for much use, this was a fairly well made set. By this I am referring to the stitching and material which may not have been the softest I’ve felt but not the roughest and it will certainly hold up to extra wear further down the line.