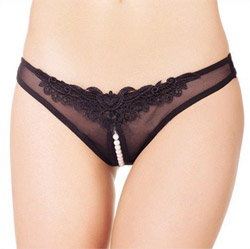 Got her going... and me too

The panty features an opening in the crotch, as one would expect but also has a string of beads (fake pearls) along the opening slit. This results in the beads rubbing against my girlfriend while she wears this panty. That on its own she found interesting, but then while we were making out while she was wearing this, I could rub my fingers along the beads, which resulted in the sensation being transferred to my girlfriend. I could also slip my fingers around the beads and through the slit and rub her directly. The excitement that the panty provided over a regular panty made the experience enjoyable/exciting for both of us...

The one issue with this panty is that it's another outfit that claims to be "One size fits most." And yet even as stretchy as it is... my girlfriend found it a bit tight around her waist, and you could see the panty pressing into her sides. So if you have any fat on your waist, this results in it being highlighted more. Even with that effect I still found it to be very attractive on my girlfriend.

The panty should be hand-washed or washed on a delicate cycle. My girlfriend washed it in a delicates bag on the delicate cycle in cold water, and it came back out without any noticeable issues.

The one facet of this outfit we haven't tried yet is having sex while she's still wearing it; however, my expectation is that the beads will likely get in the way. It might be that they can be pulled to the side and rub against me while I'm thrusting into my girlfriend, which might result in an interesting sensation for both of us.
This product was provided free of charge to the reviewer. This review is in compliance with the FTC guidelines.