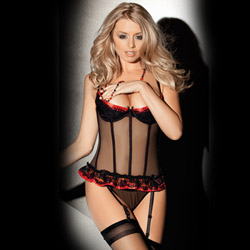 The Isabelle Bustier Set makes for a nice idea, the problem is in reality the plastic boning on this garment is so unreliable it ruins the entire bustier. This stiff, shapeless piece will ride up and drop your breasts while you're standing and especially when you're sitting. I sincerely hope this garment works for someone else but all I found was a useless bustier that made me feel awkward and totally unsexy. On the bright side the stocking this set comes with are actually functional.
Pros
Cute Non-Muffin Top Stockings
Lovely Design
Cons
No Breast Support
Shapeless and Stiff
Poor Boning
Rating by reviewer:
2
extremely useful review
Overview
It is a sad day when the best features of a lingerie set happen to be the g-string and stockings rather than the focal point bustier. Pulling the Isabelle bustier set by Escante out of the mail and looking it over can set your heart a flutter with its lovely black lace a red trim. But putting this on can leave you seriously wanting.
Material/Texture
Bustier
According to the tag the bustier is 100% nylon exclusive of the trim. The nylon itself makes up the largest portion of the garment as the sheer waist. The only part of which that is not sheer are the portions containing the nine plastic strips that make up the boning. Overall the nylon feels comfortable against the skin; it is not itchy or rough but just right. Although the plastic boning does nothing to help the garment as it is uncomfortable, does little for ones shape, cannot seem to stay in place because it would rather run up.
The rest of the bustier, which consists of the trim and bra portion, is made of lace and what I think is satin. This lace is sturdy and a little rough but doesn’t touch the skin and shouldn’t be a problem. Adding to the piece Escante threw in a red trim for the cups and bottom. It's a nice touch, the red is so shiny the material reflecting off the camera when taking pictures.

G-String
The g-string is made out of 100% nylon which can snag if you’re not careful with the garment. On the plus side this piece does contain a 3 inch long cotton crotch liner to protect the garment from letting bacteria fester.
Stockings
These are 100% nylon.
Design/Craftsmanship
Bustier
As explained above the midsection of this garment is a sheer nylon which displays the abdomen when one is wearing this bustier. To put this on the garment features a hook and eye format that gives you two eyes to choose from when adjusting. The bottom portion starts off with a lace design akin to a black bridal leg garter with two little black bows placed in the front. Below that there is a red satin like material which has a folded design which is at the bottom and also at the trim of the cups. Hidden underneath are four garter at the front and back of the garment. These are adjustable and nonremovable with a maximum length of 7 1/2. Putting the garters on should be easy enough as the metal eye just slides in and out of the plastic clamps.
The lace of the cups is a bit thicker than at the bottom covering almost the entire outer cup of the bra connecting at the bow in the middle of the bosom. This also has nonremovable, adjustable black straps, cups with some padding and an underwire. I assume this is to uplift the breasts rather than shelter anything since my nipples hit the trim rather than the padding. Unfortunately the underwire gives little support and with the boning trying to push up the bustier the combination leads to the breasts falling to the bottom of the garment rather than spilling over the top.
Overall the craftsmanship, while up to snuff in some areas, is seriously lacking in others. As if the shoddy boning and useless underwire wasn’t enough to render this garment useless the red trim around the bust, after wearing once no less, is coming undone. It seems to be unraveling from the top of the cup near the little black bow. For the sake of others I hope this is an anomaly.

G-String
If you’re into g-strings this is pretty nice. This upside down triangle shaped piece measures at 5 1/2 inches at the upmost portion horizontally sliding down the middle at a length of 6 inches vertically. The only thing that might bother some people is that the nylon does have little holes for pubic hair to go through if you have any.

Stockings
The stockings of this set are fairly sheer once you have them on with a darker, opaque portion that measures 3 inches unstretched at the top. There is no silicone inner layer to help hold these up on their own so you will need a garter if you plan on wearing them with another outfit. Overall they are probably the portion of the set I will be using the most as their craftsmanship is surprisingly well for a with purchase pair of stockings.

Experience
Packaging and Cleaning
The Isabelle bustier set comes attached to a plastic hanger inside a see through plastic bag. There are tags with stock photos of the model and other variations of this design attached to the garment that you will need to remove carefully with scissors. I would recommend washing everything in this set by hand since the bustier’s detail seems to be delicate and the nylon on the g-string can snag, same with the stockings. You will also probably want to hand dry this set.
Sizing
My Measurements
110lbs, 5’3 height, 28 inch waist, 38 inch hips, 34C bra, dress 4/6
Escante Size Chart

This set is in stock here on Eden in sizes small-large, I ordered the medium. As this is not my first Escante garment and I was aware that the medium fit me just right I had no troubles with this set in this regard. But given the lack of breast support this garment provides me at a 34C I would say this bustier is unlikely to offer any uplift to your breasts if you are a C cup or above. For that matter it is unlikely to keep your breasts from drooping as well.

Likes and Dislikes
What I wasn’t so fond of
Finding out that the bustier is essentially useless pretty much ruins this entire set for me. I considered that maybe I had ordered the wrong size. Maybe Escante’s bustier’s are different than their bras but after trying it out some more this is not the case. When all is staying put this piece fits me perfectly well. It just seems like the plastic boning is so cheap that instead of cinching in waist it allows for my lady lumps to push at it and slides up. Of course when the stiff boning slides up so do the cups since they’re not doing such a good job a supporting my boobs anyway. This just leads to a sheer mess which is made even worse if I wear to sit down. Sadly it was difficult to get a picture where my breasts weren't falling down but I managed in case you all wanted a look.

What I Liked
I have to say that absolute best part about this set was the stockings, I really liked that they did not give my thighs any muffin tops, which has happened in the past. This is a nice change of pace since they do not seem overtly cheap as I would have expected. I don’t think they’ll last me a year but they will last longer than some stocking I’ve ordered for the stockings alone which is nice. I also like that the g-string is so stretchy. This tells me that women with smaller waist and wider hips have the ability to work well with this portion of the set without it being a throw away piece.
Similar Products

Black bustier thong and stockings
Follow-up commentary   I still don't like it 4 months after original review
I ended up giving this to a friend who had a slightly different body type then mine to see how it held up. In the end it didn’t work out so well for here either. Instead of the breast support leading to a larger bosom falling out like mine did hers spilled over. I suppose some individuals might want this feature in a bustier but this didn’t placate either of us.
This product was provided free of charge to the reviewer. This review is in compliance with the FTC guidelines.

Become a Reviewer
My Isabelle bustier set tags
About author