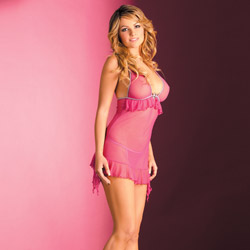 The Rose Mesh Chemise set is definitely better than I expected. It is comfortable, my boyfriend loved it, and it is reasonably priced. I just wish they would give you a choice for your bottoms for the lingerie, since not all of us want to wear a thong.
Pros:
Soft material. Flattering. Chemise is comfortable.
Cons:
Comes with thong.
Rating by reviewer:
5
useful review
Having never actually worn any sexy lingerie before, I decided to start out with something that would be comfortable and flattering. When I saw the Rose Mesh Chemise set, I knew that would be perfect. The only thing I didn’t like was the thong. I’ve never been a big fan of thongs; some of us spend enough time picking our underwear out of our butts to not want to be putting them in there in the first place. I just used a pair of my own lace and cotton underwear instead.

After washing the set, I tried on the chemise, which fit pretty good everywhere except for my chest. I am probably a little smaller there than the average woman of my body size. Since the chemise doesn’t have any underwire, it’s not that big of a deal, it just bagged a bit when I lay on my back. The only thing that kind of bothered me a little was that the butterfly patch kind of curled in after being in the dryer. I suppose using an iron on it would fix that, but I’m not about to whip out the iron and start ironing on the counter in front of my family.

When I put the chemise on later that night, after sending my boyfriend to put something away in my bathroom, I turned out all the lights, lit some candles, and dusted on some chocolate passion body powder. He came back to my room, and upon seeing me in the chemise, he looked like his eyes were about to pop out of his head. He was getting off pretty well on just the feeling of the material against his skin.

Overall, I was pretty satisfied with the set. I would prefer if the lingerie companies would give you a choice as to what bottom you want. Most of the lingerie I looked at had a thong with it. The material the set is made out of is pretty soft, not rough like a lot of mesh can be. The only thing that has me confused is that the purple set costs more than the pink set, and it comes with the same exact chemise and thong.

I would definitely recommend this product to anyone who wants to give lingerie a try.
Follow-up commentary   I still like it 3 months after original review
I still love this chemise. My boyfriend always shyly asks me to put it on for him. This set is especially fun with the Sex Fizzies candy spray I also reviewed. I also found a pair of panties that looks like it came with the chemise, it matches it so well. Now I tease my boyfriend that he should wear the thong.
This product was provided free of charge to the reviewer. This review is in compliance with the FTC guidelines.