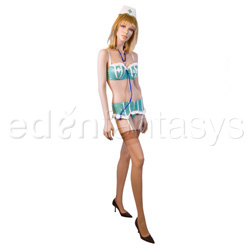 Not your average sexy nurse

I would recommend this for someone a bit smaller than me, maybe a size 8-10 with a 34C cup. As I stated, I'm not a fan of the hat at all. I was also disappointed in the way that the bra closes. I don't think this costume is a must buy except for those who are in love with the color or PVC.
Pros
The PVC is eye catching. The garter belt is cute & accentuates the butt. The thong is stretchy.
Cons
The hat is hideous. The bra is smaller than the size indicates and is prone to tears.
Rating by reviewer:
3
extremely useful review 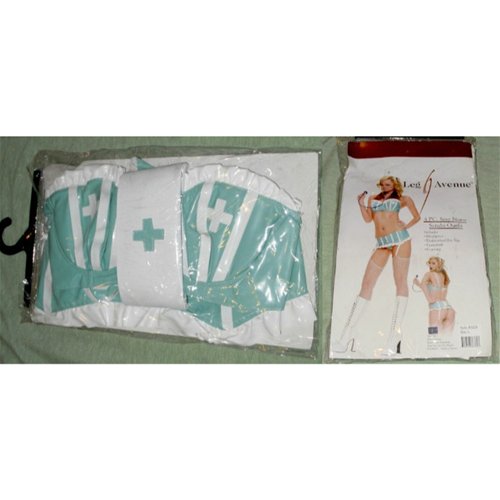 When I first joined EdenFantasys in 2009 this costume caught my eye. However, I was weary of the sexy nurse scrubs ensemble for a couple of reasons. It's by Leg Avenue and made of PVC. Of course the PVC and unusual teal color also appealed to me. The problem was/is that I'm not thin. I've always found Leg Avenue costumes to run a bit small and I thought when you add PVC into the mix you're probably going to get an unforgiving costume. Luckily, the costume is 70% PVC plus 30% polyester so there is some stretch to it.

As you can see above, it comes in the standard Leg Avenue plastic hanging packaging that you may see on a rack at a seasonal Halloween store. The costume includes a hat, bra, garter belt and g-string. The package itself was a bit dusty but that's to be expected since these have been sitting around for a while. The other photo is of the back showing how the item was packaged inside. As usual, my order arrived in a nondescript box stating Web Merchants, which is what I've always appreciated from EF. 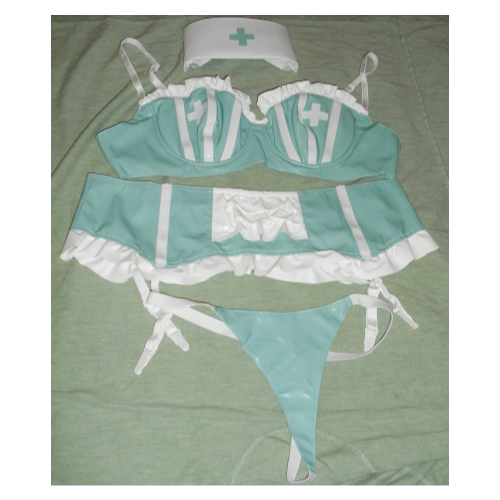 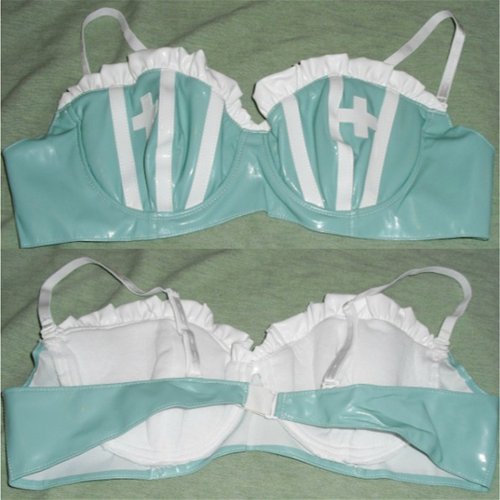 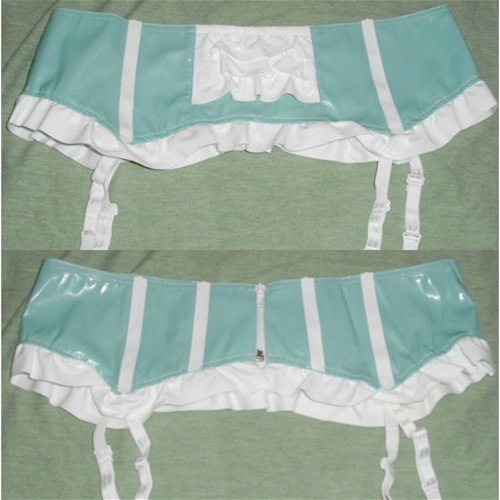 This costume is available in a size medium or large. I ordered a large. According to the Leg Avenue size chart a large should accommodate a size 12-14, C cup with the following measurements, 36-38" bust, 27-29" waist and 38-40" hip. I wear a size 10 or 12 in pants and a 36C bra. As usual, I do not list my exact measurements as I've struggled with eating disorders for much of my life but I will say that mine are pretty close to those listed for this item, with one exception, the waist. I have always had more of an up and down frame with less of a discernible waist (it's wider than the above measurements.)However, I don't really think that comes into play here since you are meant to wear the garter lower on the hip. 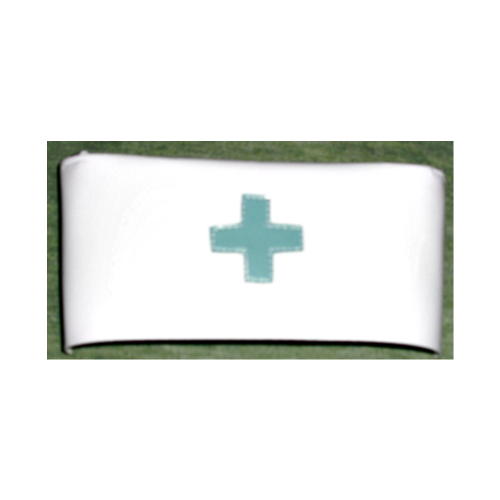 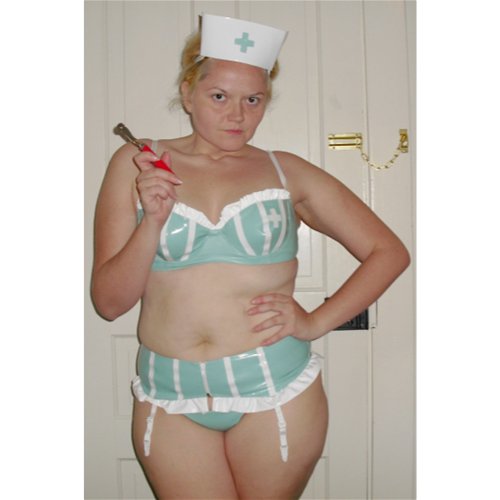 First I must mention the hat. I intensely dislike it. Yes, I have a wide head and it was uncomfortable. Aside from that I also found it to be ugly both on and off. (The above photo also shows me holding the small Fetish Fantasy Series wartenberg wheel for effect, it is not included with this costume). 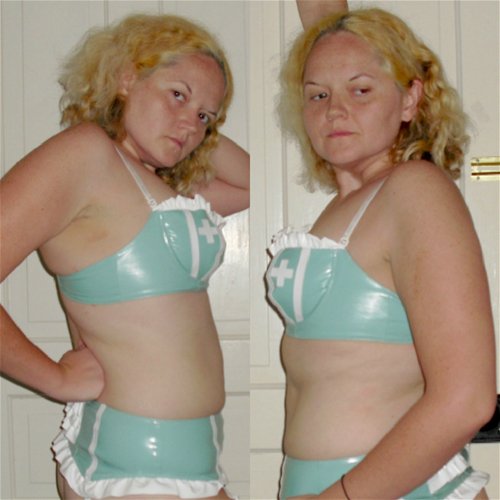 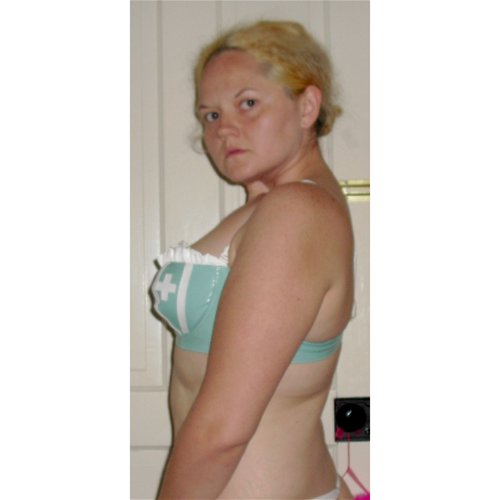 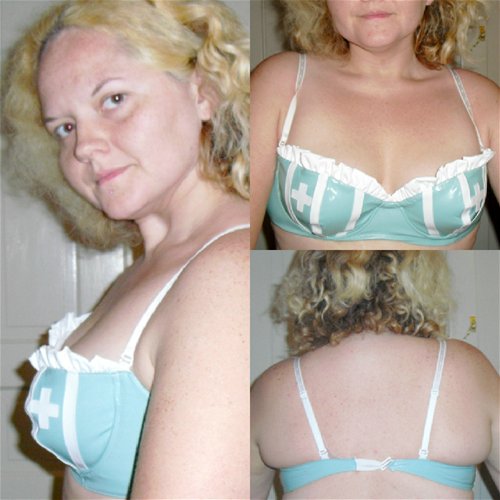 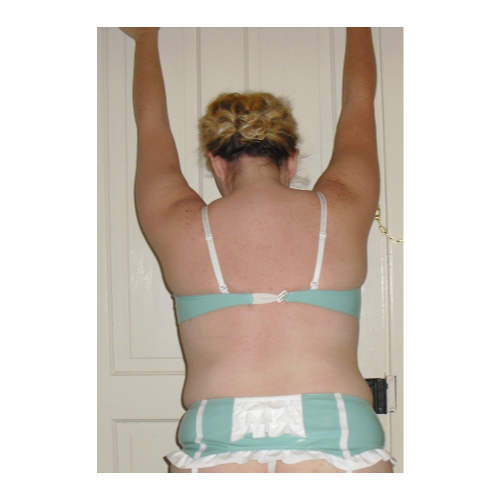 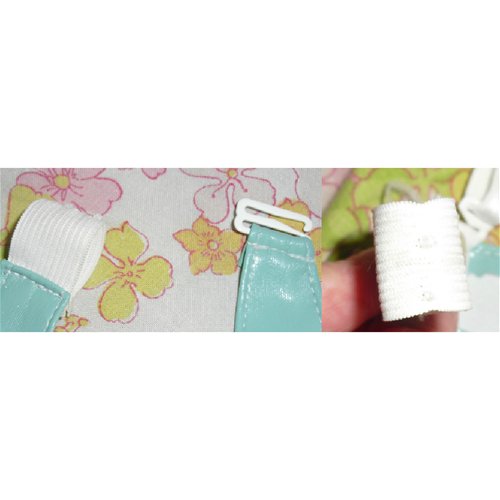 Personally, I was expecting this outfit to be a bit tight on me and it was. What I found rather disappointing was the bra. I thought that it would be the best part of the costume and rather wearable even without the other pieces. However it's 34" which is a bit too snug on me. Plus it doesn't offer much in the way of cleavage. When I adjusted the bra straps to get a bit of oomph it just made the back and sides of the bra more unflattering. Plus I'm having an issue with holes permeating the bra. You see it fastens rather oddly at the back. I've tried this on twice, once when I first received it and once to take these photos. Plus I wore it once for my boyfriend. Each time I found it difficult to try to slip the clasp into the elastic to the hole on the other side and created holes in the fabric. I suggest hooking it shut first and then pulling it over your head, although that is uncomfortable.

I found the elastic waist band of the g-string to be fairly comfortable. The actual front of it was a bit small on me but I often have that issue so I just think that's a me issue.

At first I tried to wear the garter belt too high and backwards. Then I took a look at the model on the packaging and adjusted it. Once I did that I still had some muffin top but it looked much better. I do like the frilliness of the accent in the back. I feel that it accentuates your butt, which I always love in lingerie.
Experience
I wore this outfit to give my fiance a lap dance. I think that he dug the garter belt the most since it gave a very good view of my booty. He was not crazy about the hat either so it was the first thing I removed when I stripped.

P.S. I ran out of space in the review so I'm placing this here. The washing instructions on the inner tags are in Spanish and there are also symbols included. I never learned the symbols but I do know some Spanish. To care for these pieces you are supposed to hand wash, do not use chlorine and do not iron.
Follow-up commentary   I still don't like it 3 months after original review
I haven't worn this outfit since the week that I got it. I even saw it in the Rockiwhore porn and didn't put it on while we were watching it. I just don't find it comfortable or flattering.
This product was provided free of charge to the reviewer. This review is in compliance with the FTC guidelines.

Become a Reviewer
My Sexy nurse scrubs tags
About author

Reviewed by Sera26 (Eden Writer) "In a word: pleasure."
Rank
5.8
wrote 61 reviews
This review was edited by
Comments
Make a post
Forum
No discussions yet.
Thank you for viewing Sexy nurse scrubs – costume review page!
Top