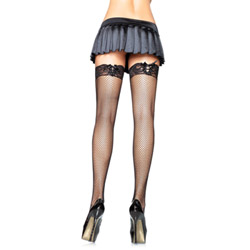 Rolling Over Is A Trick For A Dog, Not My Stockings

The idea behind these is a great one, but unfortunately the execution was a little less than stellar. The material is super soft and comfortable and fantastic to touch, but they just don't stay up very well. You could wear them lower, but if you have short legs then you'll end up with bunching around the ankles.
Pros:
Very soft material, Will hold up relatively well
Cons:
Not good for short legs, Band has no support allowing for rolling and not staying put
Rating by reviewer:
3
extremely useful review
These corset topped fishnets are actually really similar to these stockings, only with fishnet instead of an opaque stocking.

The packaging wasn't anything spectacular, just the stockings with a cardboard insert and a piece of cardboard wrapped around them inside a plastic bag. The front showed them being worn by a model, and the back had sizing information, materials, and care instructions. These are one size stockings, 100% Nylon, and should be hand washed in warm water. You could probably get away with washing them in a lingerie bag on a gentle cycle as well.

These are your basic average fishnets from Leg Avenue, but with a laced top that resembles a corset since it laces. The fishnet is really soft and comfortable, and feels like pretty much any fishnet piece from LA. It'll snag, but shouldn't run unless the snag is really bad. There's no reinforced toe, but the netting is tight enough that your toes shouldn't really pop out at all. The lace top is also really soft and feels great to the touch, however it's also a bit flimsy. They're about 3" tall and there's nothing inside of them to keep them where you put them on your thigh, so they like to roll over on themselves just a bit. You can wear the laced up part in the front or in the back, it makes no real difference in comfort. The ribbon laces through a total of 8 painted metal grommets and can be changed out to a different ribbon to give you more room to lace, but that won't stop them from rolling over anyway. You could just change up the color if you wanted instead.

As stand alone stockings, these don't really work that well. Pair with a garter belt and now you're talking about them being able to stay up a little better. Because of the embellishment a straightforward "clip in the front and back" approach doesn't work quite as well, but it's still pretty easy. If you clip a few inches away from the grommets towards the outside of your thigh and then put the one in the back more towards the inside of your thigh and you'll have them held up pretty evenly without having to worry about them rolling a lot.

I tried to wear them up where I like to wear my stockings normally, which is about 19 1/2" around. Well, I got a lot of rolling and muffin topping. None of it was uncomfortable, but it still wasn't sexy at all. If I pull them up really high, they still roll and muffin top but they stay ok. I had much better luck wearing these a little over my knee. Before they started rolling they sat about 21" off the ground, after rolling it was closer to 20 1/2" or so. There was a little bit of bunching around the ankles and the top still rolled some, but it didn't roll as much (at least in the front) and there was no muffin topping at all. These are best off being worn lower on the leg I think. Longer legs and skinnier thighs can wear them up a little higher though.

In this picture I just had them pulled up, I hadn't even tried to walk around yet:

Experience
I love the way the material feels. I could roll around naked in a bed filled with these all day. As for actually wearing them out? I'm going to go with something else pretty much every single time. I like the way they look, but having to stop to adjust my muffin topping thighs and fix lace that keeps rolling over isn't sexy, and I don't always want to wear a garter belt. Not all hope is lost if you're taller I think, but I'm 5'2" and I have relatively short legs and they just don't look that great on me.
This content is the opinion of the submitting contributor and is not endorsed by EdenFantasys.com

Reviewed by Jul!a (Eden Writer) To the critics who despise us, go ahead and criticize us. It's your tyranny that drives us, adding fire to the flame.
Rank
7.5
wrote 560 reviews
Comments
Make a post
Forum
No discussions yet.
Thank you for viewing Fishnet stockings with corset lace top review page!
Top