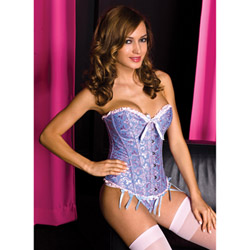 This misnamed corset is nonetheless extremely lovely. The metal busks may challenge wearers at first, but it is the lacing system that causes the real trouble. Does the beauty of the corset make up for its problem areas? You decide.
Pros:
Pretty pattern and colors.
Cons:
Poor lacing system.
Busks take some getting used to.
Not totally comfortable.
Rating by reviewer:
3
extremely useful review
Continuing with my new series of corset reviews, this week I received my assignment for June: the Paisley Design Brocade Corset by Music Legs. Having not tried any of their products before, I checked out the Music Legs website to try to learn more about them, and discovered that Music Legs is a label registered to Sky Hosiery Company. While their headquarters is located in California, the company has offices and stores around the globe. According to the website, "Music Legs is dedicated to women who possess the power of attraction."

Right from the start, let me just say that my main issue with this corset is the name...Paisley Design Brocade Corset. That implies strongly that the corset design is paisley. Guess what...it isn't. Paisley, as I am sure you know, is a design that resembles teardrops, or...well, sperm. The design featured on this corset is not paisley. It is actually a pattern that is usually referred to as damask, more of a scroll design. 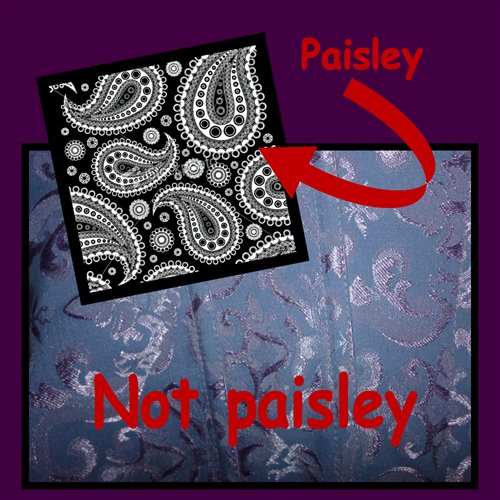 Now that I have gotten that off my chest, I will say that this is a beautiful corset. It is made of 80% nylon, 20% spandex, so it has some stretch. From the pictures on the product page, you may have the impression, as I did, that the color of this piece is lavender, as it says in the description. In reality, it is more of a pale blue...like a very light-colored denim. The brocade design is created using iridescent threads of pink/lavender, and it is those threads that give the corset its shimmery, purplish appearance. The corset is trimmed with pale pink and blue ribbon ruffles. There are six pale blue bows on the bottom of the front side of the corset, and strands of pink and blue ribbons are used to tie one more bow in the top center, drawing more attention to the wearer's cleavage.

This corset is different from other corsets that I have purchased here at EdenFantasys in that it features a metal busk on the front. If you do not know, a metal busk is intended to keep the front of the corset straight and upright. It replaces the hook and eye front closure, and is supposed to be an easier way to fasten a corset. For the Paisley corset, there are six loops on one side's busk, and six corresponding posts on the other side's busk. The back has a long, single, pale blue ribbon that is laced through ten eyes on each side of the corset. Ten plastic bones help give the corset - and the wearer - an hourglass shape.

The corset comes with a matching thong. 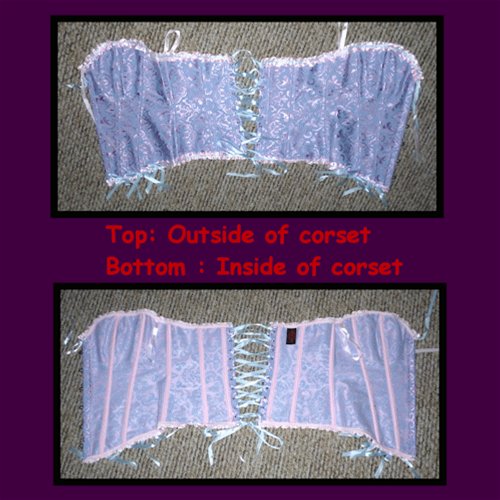 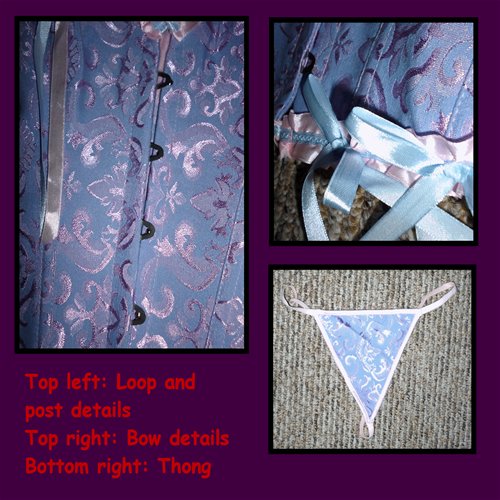 If this corset were laced as tightly as possible, the measurement at its widest point in the bust would be 34". The ribbon used to lace this corset is extremely long...about 117". Extending the lacing as much as possible will add a good bit to the width, but in my estimation, if you have a band size above 44", you probably will not be able to fasten this corset. The length of the corset in the front is 14" at the longest. In the back, the length is 11". In other words, this one is for those of us with short torsos.

The thong is basically a triangular piece of matching cloth measuring 7" along the top and 8" down the sides. The waistband measures 29" unstretched, and about 50" stretched. It's not that spectacular, but no one buys a corset for the thong, right?

The corset came to me in a plastic bag, with (but not on) a plastic hanger. It has an extra large product tag attached displaying the same photos of the corset that are seen on the product page. The tag is informative in that it lists the corset as fitting those who are between 5' and 5'10" who weigh between 100 and 175 pounds (hey, that's me). It tells that the product was made in China, and it gives the care instructions - hand wash in cold water, do not tumble dry, bleach, or iron. Hang to dry. 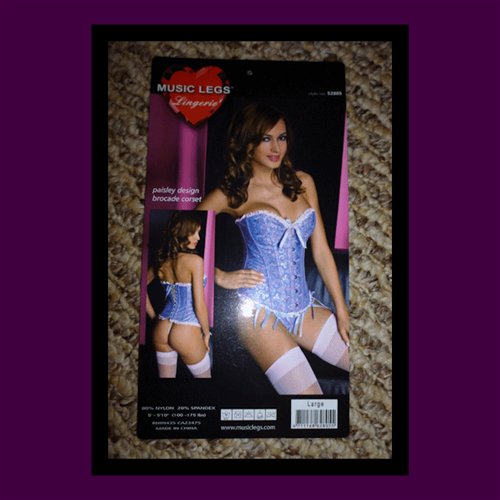 As for storage, this piece has two loops to use for hanging, but I prefer to fold my corsets in a manner that the boning stays straight and store them in a dresser drawer.
Experience
This was my first experience with metal busks, and I will be honest...I thought it might be my last. There was a point where I was considering sending the whole thing back and cancelling my assignment. I just didn't think I was going to be able to fasten it. I loosened the laces as much as possible, and tried to fasten the front while flat on the bed. I fastened the top loop, and then the bottom loop. After that, I worked for a good ten minutes (or at least, it felt like it) to fasten those in between. The busk with the loops wanted to turn under, so the loops would stab into the fabric on the other side, rather than hooking over the posts. I managed to get them all hooked, but as the laces were tied at the top of the corset, I was unable to do much in the way of tightening them.

I took off the corset, took out the ribbon entirely, and relaced it so that the laces would tie at the bottom. I fought my way back into the corset...it was slightly easier to deal with the busks the second time...and discovered that I had relaced the corset exactly as it had been originally...with the tie at the top. I was more than a little put out with myself, but I was determined to get it right. I took off the corset again, relaced it again, making sure to have the tie at the bottom, and put the corset on for a third time. It was much, much easier to get the loops and posts lined up the third time. I did not have much better luck at tightening the laces though. A second pair of hands would have probably been helpful.

The problem is that the ribbon lace is so long that it is a lot of work to tighten it for the full length of the corset. It would be better if it were like most corsets that I own...two ribbons each tightening half the length of the corset. If I wasn't afraid that the ribbon would run, I would cut it in two and relace it that way. I might do it anyway. I also had some problems with the bottom ruffle turning under.

One plus of the metal busks is that the system does indeed help the front stay flat. It also did not allow for skin to show between the loops/posts, as can be the case with front hook and eye closures.

As you can imagine, and as the pictures show, this corset did push my breasts up and out. It definitely did what a corset should do in that respect. The bottom had a bit of a weird way of pointing out rather than flattening my stomach, but at least in part, that has to do with not being able to tighten the corset laces adequately. If I can fix this by splitting the ribbon into two shorter laces, I will mention it in the follow up. 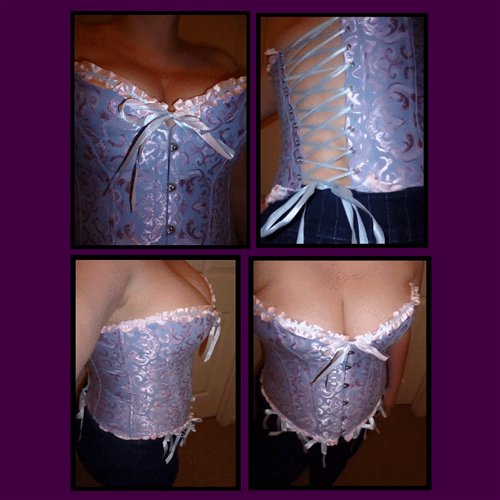 For now, the problems with the lacing, along with it not being the most comfortable corset I own (it's a little itchy), have me dropping the rating of this corset to three stars.
Follow-up commentary   I still don't like it 1 month after original review
I have tried to like this better, but I just don't. I think it is a bit too frilly for me, and of course, the lacing system is just awful. Perhaps I should put this one up in Eden Classifieds, but is it fair to push this mess on someone else?
This product was provided free of charge to the reviewer. This review is in compliance with the FTC guidelines.

My Paisley design brocade corset with g-string tags
About author