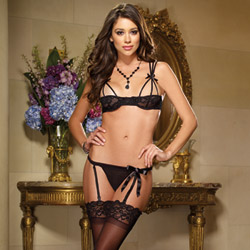 Bra and panty set
by DreamGirl

Cute in theory, disappointing in practice. I loved the idea of this vintage-esque set and felt it stood out from a lot of other sets, but mostly just in the fact that it runs small and lacks any curve control. The under wiring to the bra is shotty, though the lace is high detail and durable. I'm saving this set to pass on to a less curvy friend, as its design just can't handle boobs above the size of a B very well.
Pros
Great design, Durable lace, Easy washing instructions
Cons
Sizes run small
Rating by reviewer:
3
extremely useful review
Sleek, tightly fitting, classy with a sexy flair - all the things I thought when I clicked the order button on "Bra, thong and garter." Eden could've gotten a little more imaginative with the naming.

The design of this lingerie set is unique and drew me in because of the understated but cute bows, and the straps branching out on the bra really flattered shoulder shape in the pictures. I thought to myself, "I have an anniversary coming up, this would be perfect!" I stand corrected.

Granted, I ordered this a size too big than I usually do, expecting that the last set I ordered from another company ran too small and that this would follow in its footsteps. I went according to the sizing chart and ordered a large, only to find that the underwear are far too big, the bra is much too small, and I'm popping out everywhere like a jack in the box. The bra says a Large, so I know there wasn't a mix up. I'm a fuller sized girl, so here are my measurements if you need a comparison:

My proportions are a bit weird, but I usually pull off mediums and while the underwear may be tight, the bras are usually just right. The bra was what I liked most about this set, and sadly, my boobs pop out from underneath and it isn't flattering whatsoever. 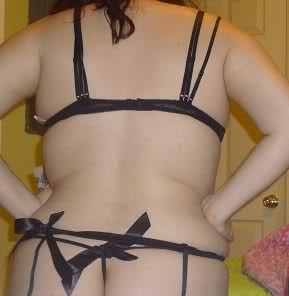 The bows are a bit of a mess, and the garter is frustrating to line up at first, but the lace is soft and feels extremely durable. A few people complained about such little material for the price, but if this fits you, it's not going to fall apart after a few washes. The detailing in the lace is nice with flowers and spiderweb patterns that just look high quality. The design overall has a vintage feel to it, which is why I really had to try this. But the vibe I get from this set? Not for bigger women!

The set arrives on a hanger wrapped in plastic wrap and is nicely hung up until you're ready to take it off and give it a go. The hanger is useful for other things, so I've kept most of mine and hang small items on them.

The garter is simple, just a satin band that wraps around your hips with a bow on the side. The hooks are what you can expect from most cheaper lingerie sets and require some fiddling to really get them hooked into any stockings you'd like to wear. The thong is standard black and should fit most, though it's a little narrow and looked awkward on that area for me. It didn't quite, er.. cover everything, if you get my drift. I found this to be not only awkward, but frustrating, though I'm sure not everyone would have this problem.

The washing instructions included are pretty simple: Hand wash in cold water and don't just throw it in a dryer. You're going to need to line dry this item or just let it sit to dry and you're all set.

Here's the materials used in the fabric:

Polyamid - 93%
Spandex - 7%
Experience
I was really disappointed in the sizing being off for this. I could've easily sent it back and exchanged it, but I didn't feel it was worth the trouble and figured if I wore it one night, my partner wouldn't notice in the moment if I was popping out or not.

I loved the vintage feel to the piece, the lace seems quality enough, but something is just off about it for me. It seems more suited for a non-curvacious body, as there's very little give to the fabric and I'm afraid of ripping it by forcing my chest in it one way or another. I was also really disappointed in the little support given by the bra, especially for a bra with under wiring. I need a little more support in my bras and while usually sexy lingerie isn't the best place to go for that, I don't feel for this price I should've had anything less. You aren't going to get any lift or support with this, as it's mainly just meant to look pretty.

I've included an awkward photo of my nipples trying to play peekaboo with the camera: 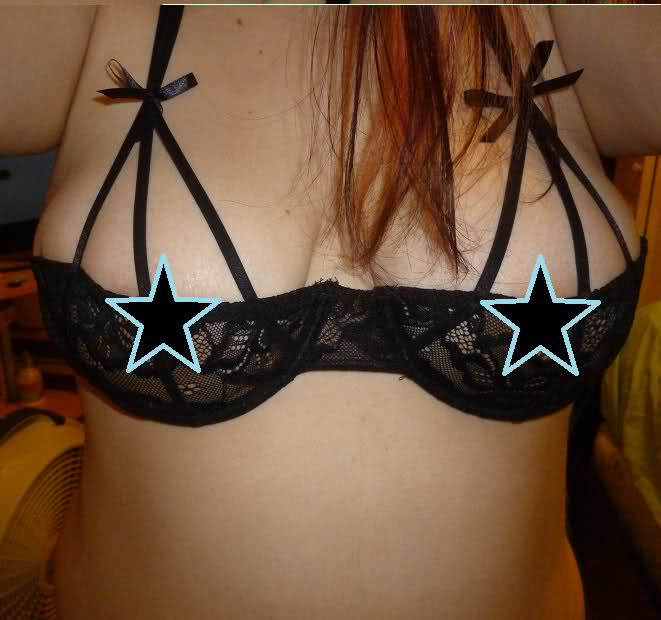 Follow-up commentary   I don't like it anymore 2 months after original review
When I first got this piece, I thought it was the grandest thing to hit my tatas and hips. It's still okay, but it is a little scratchy and could use some work, I've learned after more than a few uses and washes. I still think it's okay, but there isn't an option for that here, so I'm just going to say that I've started to like it a little less than I normally did.
This product was provided free of charge to the reviewer. This review is in compliance with the FTC guidelines.

Become a Reviewer
My Bra, thong and garter tags
About author

Reviewed by HannahPanda (Eden Advanced reviewer) Without deviation from the norm, progress is not possible. - Frank Zappa
Rank
6.1
wrote 64 reviews
Comments
Make a post
Forum
No discussions yet.
Thank you for viewing Bra, thong and garter – bra and panty set review page!
Top