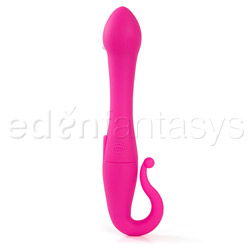 This toy would best work for someone who does not require strong vibrations (or barely any) and also requires their vibration to be nearly silent.

The material is stated to be 100% silicone. Right out of the box it did not have any smell. There is little to no drag is the exa and is the exact same as skin on skin. There is no texture making this a good choice for anyone. The vibrating end of the toy is very firm. The other end, the cover over the top of the razor, is semi-firm and flexible in the little tail portion.

While testing the razor, the handle and head/vibrator end fit easily into my hand and was very comfortable, but due to the fact that this is made of silicone, hair stuck to the toy very easily.

The egg that produces the vibrations has a sliding on/off button that requires more force to lock into the "on" position then I originally thought, but it isn't so tough as to require any extra force. I was just surprised at first. However, the slide does seem to be getting easier with use. Either that or I'm getting use to it.

Because the egg is in the bulbous end, this puts the vibrations directly in the head, although they are practically nonexistent. The vibrations are nearly silent, and cannot be heard over even a quiet fan, t.v. or even from 3 feet away. There is no variety to the vibrations, just on or off.

Cleaning this toy is a bit of a challenge due to the razor. The razor does slide out to allow changing of the battery, but there is a metal piece in the center for connectivity that should not get wet. The cover/cap that goes over the razor is not water tight so cleaning is very challenging. To clean this, I used warm water and soap. I applied warm water to a wash cloth, wiped the toy down, then applied soap to the cloth followed by wiping the toy down again. I then wiped off with a non-soapy part of the wet cloth a few times to get the remaining soap off. I paid special attention to making sure the water did not get on the egg. I fear that water would not be a good thing. Air drying is the only option if water should be an issue.

Cleaning the razor after use is easy. I put the tip under water for a quick dip and then air drying is all that's needed.

As for storage, you could put it back in the box, or in your own toy storage. I put mine in it's own zip lock bag in my toy storage to keep lint off the silicone (hair magnet!).

The packaging is a bit over the top. It's black with silver filigree covering the plastic clam shell style the toy is housed in.

Though this is a unique idea, I'm not really sure who this would work for. I imagine someone in a design lab standing around thinking, "You know? When I shave my privates, the electric razor gets me hot...how about we combine them?"

This might be a decent toy if you get the egg removal key (which I did not, but from what I understand people after the first wave will get them) so that the egg can be upgraded to something actually worth having. Also, within the packaging the "product details information packet" was not for this toy. But, the basic idea was the same.

This didn't work at all for me as a vibrator. The razor is nice for details/small spots and the design of the toy made a good handle for the razor. It is very comfortable. However, the vibrations (though quiet) were almost nonexistent and completely worthless. The top/cover for the razor comes off too easily (though I'll bet the belt does help) and serves as a distraction. Having a razor that close to my privates when I'm not attempting to shave is distracting.
This product was provided free of charge to the reviewer. This review is in compliance with the FTC guidelines.