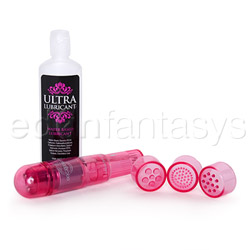 If budget is at the forefront of your mind, this rocket can be worth your time. If you've got more than ten dollars on hand, though, you may want to look for a toy a bit quieter or more durable. The variety provided by the changeable tops is hampered by the lack of vibration levels, and the fun stops altogether if (like me) you get it too wet.
Pros:
Reasonably strong vibration, low price, bonus lubricant, changeable tops provide variety.
Cons:
Not that waterproof, only one vibration level.
Rating by reviewer:
3
extremely useful review

The Rocket is meant to stimulate you externally, so it's best use is against erogenous zones such as your clitoris, labia, or nipples, and it can be used to arouse yourself during solo play or as foreplay between partners. Rockets aren't really meant for vaginal or anal penetration, though it could be used to tease your openings. I didn't have the opportunity to test this but it could also be used against the head of a penis, or down on the testicles (though the vibration might be a bit strong for the former, and I definitely wouldn't recommend using any of the spiky tops). It could even be used for non-sexual massage if you're inclined (which could maybe make a good cover if someone finds it).

The material this toy is made of should pose no problem. It is non-porous, phthalate free, hypo-allergenic, and latex free, so it is quite safe. There's no smell to speak of, and while I never thought to lick it I'm sure it'd taste fine. It's fairly sturdy and easy to clean.

You might be able to pass it off as an innocent shoulder massager I suppose, though it really shouldn't be too hard to find a discreet space for such a small toy. You could theoretically keep it in your purse if you wanted.

Overall this is probably a good beginner's toy. It's small, cute, cheap, and simple. More advanced users, however, probably wouldn't get much out of it.

Functionally speaking this toy could use some improvement. The way it works is that you twist the end between three settings: on, off, and open. Immediately I knew this wasn't promising, especially for a toy you're supposed to be able to use in water. Just a smidge too far in trying to adjust whether it's on or off, and the battery compartment can pop right open to let the water in.

While I managed to avoid that by vowing to only turn it on or off out of the water, it's still an irritation when there's little to no threat of getting water in. The way they made these things means you have to be very careful in twisting it, because the damn thing has a hair trigger between settings, and it honestly didn't feel evenly distributed between the three settings. One setting will take up half the rotation, whereas the one next to it only lasts a few millimeters before bouncing right into the next one. Damn annoying.

The tops were fairly well-designed, though I was definitely more impressed with some than others. You've got four tops in addition to the one built-in at the top of the Rocket. One is smooth and rounded, and frankly struck me as rather boring and didn't seem to hold vibration as strongly as the others. The next had six raised circles, which I think would have worked better as raised bumps rather than being flat and a little uncomfortable around the edges. The other two both had tiny spikes, one with thicker and the other more numerous. These two were the ones I really enjoyed, though I could easily imagine other, more sensitive users finding them too harsh. It's all a matter of preference here, honestly.

The vibrations are moderately strong. They seemed to be going for something in the middle that could work for most people, which is wise since it only provides a single level of vibration. It worked fairly well for me and is neither my strongest nor weakest toy. There is a lot to be said, though, for being able to adjust the intensity of a toy, and I do think that is a weak spot here. There are some people this level of vibration simply will not work for.

I'd say the noise was on the higher side. The only time I didn't find it rather loud and grating was when it was submerged underwater--which comes with its own set of problems.

In fairness, this toy didn't immediately crap out underwater. I think it lasted a good hour or two of being mostly submerged in the bath before I noticed the inner chambers sloshing about. Even then, the determined little thing lasted awhile before the vibration level began to wobble, gurgle, and give out. I believe I gave up before it completely died, but after drying out and trying again later, it still only gave a few seconds of half-hearted whirring before well and truly dying.

I decided to keep the little plastic pouch it came in, but I wouldn't exactly advertise that as particularly useful. After all, you have to tear it open to get at the toy in the first place, so there's no real way to close the top. It helps keep the attachable tops from rolling around my toy chest willy-nilly, but only just. Someone with a bit more motivation to do so could just grab a small ziplock and dump them all in. On the plus side, despite the many easily-lost parts, the rocket itself is small and doesn't take up much space.

As for cleaning, well, mine didn't get terribly messy, so I'd probably suggest a simple wash with a baby wipe or hand-towel. Since it is (sort of) waterproof, it should be fine.

I should take a moment to mention what ended up being the best part of the kit for me: the one-ounce bottle of Ultra lubricant. I don't feel qualified to write a full separate review for it since I've only used it for personal play and not for intercourse, but I'm definitely a big fan so far. It's water-based, so it's friendly to toys and condoms, and it's inoffensively flavorless. One ounce normally runs for five dollars, so you're getting it quite cheap here. Still, I may end up buying a new bottle when this one runs out.

This toy only lasted one full session for me. Well, not precisely full, seeing as I gave up.

I'd first tried it in my room before quickly deciding it was far too loud to be used there, and instead decided to give it a go while washing. After all, I've got more privacy there, and no one will wander by my room and wonder why it sounds like I'm having illicit liaisons with a blender. Before the water simply became too much for it, it was nice. Not great, but nice. The vibration was good, even rather strong--stronger than some of my more expensive toys, in fact.

Opinions on the different tops are going to vary from person to person, but as I said, I enjoyed the little spikes. They produced an interesting sensation along my labia, but felt particularly nice tugging gently against my nipples, almost like teeth.

I didn't get to orgasm before it became waterlogged, but I do feel that it was hardly a worthless toy. Kept out of the bath (and possibly the shower), it could be a decent investment for someone low on cash and high on privacy. If you're not worried about people hearing you, it could be worth it. For me, unfortunately, I suspect it wouldn't be worth purchasing a replacement, despite how nice it felt on my nipples.
This content is the opinion of the submitting contributor and is not endorsed by EdenFantasys.com