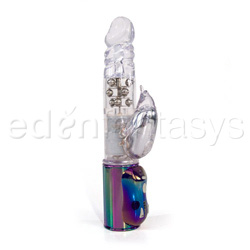 The Bangin’ Beaver has tons of great features, and no major flaws. I love this toy, and can’t recommend it enough. It would be hard to do better for the price. It may take a few minutes to figure out, but it’s more than worth it!
Pros:
Great stimulation inside and out, lots of options, attractive and very comfortable.
Cons:
Minor design issues (the controls and battery pack could be a little less complicated).
Rating by reviewer:
5
extremely useful review
I like dual-action vibrators|Rabbit vibrators - Jack rabbit vibrators - Rabbit pearl vibrators because they’re versatile and offer so many options for play, and the 7th Heaven Bangin’ Beaver|Rabbit vibrator: 7th heaven bangin' beaver is absolutely no exception. In fact, this toy is about as good as it gets. It’s become one of my top three favorites--and I own several drawers full of sex toys!

The Bangin’ Beaver is 10” long and 1 1/2” in diameter with a 4 1/2” insertable shaft. This multi-function toy features a rotating shaft with metal pearls and a beaver-shaped clitoral stimulator, and both functions offer seven different settings. The vibration is controlled by an “on-off” switch, and a separate button controls the setting.

The Bangin’ Beaver is of standard length, and I found it to be very satisfying, especially since it has excellent girth. The toy also has great material consistency: comfortable, but pleasantly firm, and even better with lubricant (I tried it with both water-based and silicone lubricants, and liked both).

The rotation and pearls provided fabulous stimulation, hitting all the right spots, and the different settings allowed me to gradually increase the intensity. I especially like the metal pearls, in place of the traditional plastic: I’ve had issues with plastic pearls jamming or slipping out of place, particularly with heavy use, but the design of the Bangin’ Beaver prevents that problem.

The feature that really sets this toy apart, though, is the clitoral stimulator. The beaver is placed so that it hits exactly the right spot, and I think any one of the seven settings could easily have pushed me over the edge. This toy has power! The first three settings offer regular vibration, which increases in strength and speed at each level (the third level would probably be too intense for beginners, or those who don’t like extremely strong stimulation).

At the fourth setting, the toy vibrates in pulsations. Each pulse goes from the lowest level to the highest in five seconds. The fifth setting provides short, intense pulsations (about a half-second apart), and the sixth setting is similar, but the pulsations are shorter, and spaced more closely together. The seventh setting provides three short pulsations, followed by one longer one. The variety is amazing, and has resulted in different (but always multi-orgasmic!) experiences each time I’ve used the toy.

The Bangin’ Beaver is a visually appealing toy, consisting of a clear jelly shaft with an iridescent purple base. The jelly material does tend to pick up dust and fibers, meaning the toy needs to be cleaned both before and after use. Cleaning (using toy cleaner|Sex toy cleaners and wipes and water) is very easy, as the Bangin’ Beaver doesn’t have any hard-to-reach spots.

All in all, the Bangin’ Beaver has tons of great features, and no major flaws. I love this toy, and can’t recommend it enough. It would be hard to do better for the price. It may take a few minutes to figure out, but it’s more than worth it!
Follow-up commentary   I still like it 30 months after original review
Well... I wish I had better news.

Unfortunately, this is a jelly toy, so its life was always going to be limited. I was careful to keep it as clean as possible and store it well, but the material started to deteriorate a few months ago, and the toy developed a very gummy, sticky texture. Not so sexy. I eventually had to throw it out.

I got a lot of enjoyment out of this toy. I absolutely loved it up until I had to stop using it, and I'd say two years is a pretty decent life for a sex toy. I don't usually buy jelly toys, but to be honest, I'll probably replace this one. That said, I would love to see a silicone or other sturdier, materially safer version.
This product was provided free of charge to the reviewer. This review is in compliance with the FTC guidelines.