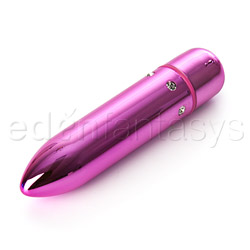 A Big Tease for this Power Queen!

The Crystal High Intensity Bullet is a nicely made bullet for the price. It’s waterproof, has no wires, and has a pretty effective design. This bullet is moderately powerful. If you are a clit of steel girl like me, don’t get this one! It was just a big tease for me. At times, I found the button hard to operate. Although I didn’t fall in love with this bullet, I think a lot of people will like it. I’m still on my search for the perfect powerful bullet!
Pros:
Quiet
Waterproof
No Wires!
Cons:
Button hard to use
Weak
Battery Guzzler
Rating by reviewer:
3
extremely useful review

In my quest to find the perfect powerful bullet with no wires, I found California Exotic’s Crystal High Intensity Bullet. I love its pretty design with little fake diamonds. Ever since I fell in love with Eden Fantasy’s Basic Bullet I’ve wanted to find more! Bullets really work well for me. Unfortunately for me, this bullet was not a winner.

Don’t use this bullet anally! It’s really small and would be very easy to get lost up your butt!

This bullet is great for most individuals looking for a moderately powerful bullet that’s super quiet and waterproof. Its best use is stimulating the clitoris but it can also be used for other erogenous zones. The Crystal Bullet is really well made with a lot of good qualities. It just didn’t have enough power for this clit of steel girl. 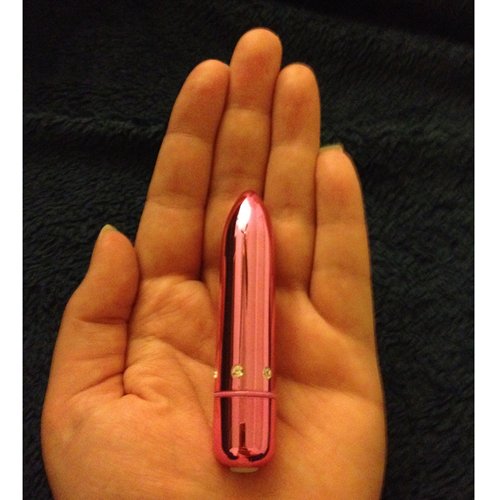 The Crystal Bullet is made out of plastic, which rates an 8 out of 10 on Eden Fantasy’s safety scale. It is non-porous and hypoallergenic. The bullet is very smooth and hard all over with no give whatsoever. There is no drag to the bullet; it glides smoothly across the skin. I found no seams. There is no texture on this bullet. If you love smooth toys, this is a great plus. I think beginners to advanced users can find pleasure in this toy. There was no smell to the bullet when I toke it out of its package.

I love the design of the Crystal Bullet. It literally is shaped like a bullet with 6 crystals along the bottom. There is the screw cap with a button on top. You have three color choices: pink, purple, and silver. I tend to love the color pink so that’s the color I got. The pointed shape makes it easy to pinpoint stimulation on an area like the clitoris.

The size is perfect for beginners to advanced users. It’s the perfect size to stimulate your clitoris or other erogenous zone. It’s 3 ¼” in length, has a circumference of 2”, and a diameter of 5/8”. It’s only .5 oz so it’s really light!

The bullet is very small and light making it easy to travel with. It’s also very easy to hide.

My main disappointment with the Crystal Bullet is the power and button. The vibrations are located throughout the bullet, but felt most powerful at the tip. The bullet is moderately powerful and will probably be suitable for most individuals. However, I need LOTS of power to orgasm so it wasn’t enough for me.

I really dislike the button on this bullet. Not only is it hard to press, but it is also hard to turn off. To operate the bullet you hold down the button until you reach your desired speed. During my first few uses, it was hard for me to determine what the highest setting actually was. I actually prefer wired bullet to this one because the wheel is easier to control than a button. This bullet has no patterns.

The button lights up red during use. After you are done, you press the button once to turn it off. It was really hard for me to activate the button. Plus, after I finally turned it on, it was hard to get it to turn off! I had to use my fingernail a few times until it turned off. I would definitely not get this toy if you needed a bullet to turn off fast.

One really positive thing is that the bullet is very quiet. Much quieter than the other bullets I own (although they are more powerful). If you need a quiet bullet, this is a great option. It's as loud as a cell phone vibrating. It’s also waterproof making cleaning time a breeze. Or you can take it to the shower if you want to have some fun.

The Crystal Intensity Bullet is powered by one N battery. It is included in the package. It’s really easy to insert. When you screw open the cap, there is a white paper inside that shows you which direction to put the battery in. Make sure you leave the paper in! I always want to take these out, but they always say inside to leave them in. After a couple hours of playtime the battery finally died. However, I continually used the bullet on the highest setting. I do wish it lasted longer considering these batteries are more expensive and harder to find.

The Crystal Bullet is really easy to care for since it’s waterproof. I wash mine with warm soap and water, or you can use a wipe. Since this bullet is plastic, you can use a silicone or water based lubricant.

The Crystal High Intensity Bullet was packaged in a see through package. There weren’t any naked women on the front or back but you can see the toy. It isn’t discreet, but it is recyclable. Here is the front. 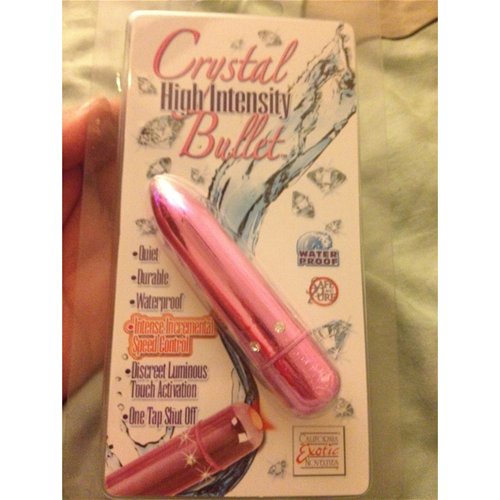 The back lists all of the functions and how to operate it. There isn't a lot of directions, but enough to operate the bullet. It comes with 1 N battery and gives simple instructions for use. 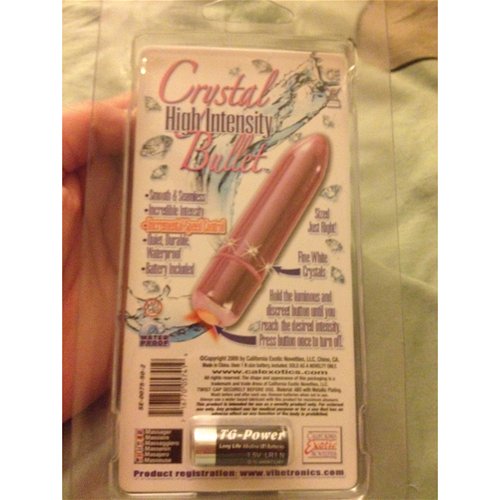 I store my bullet in a plastic bag in my toy box. It’s super small so you can store it nearly anywhere!

I rated this bullet 3 stars out of 5. Although I didn’t have fun with it, it’s really well made and cute! Most individuals who have more sensitive clits will like this bullet.

I’ve wanted this bullet for a long time. When I finally got it, I was disappointed. Its highest setting is about half as powerful as my Eden Fantasy’s Basic Bullet. I love the design, but the power was too low for my liking. I tried to make it work, but each time I got bored after a while and grabbed my Eden Fantasy’s bullet. I’m really sad we didn’t work out, but I know a lot of people will like this bullet. For me, it was a big tease! It was enough to get me going, but not enough power to finish. After a playing with a few N battery operated toys, I have found that they are not powerful enough for me. I’m going to stick to vibrators that use regular batteries or are rechargeable.

RO-120mm bullet
$31.99
Follow-up commentary   I still don't like it 2 months after original review
I love the look of this bullet but it just isn't powerful enough for me. I've found that N battery operated toys don't work for me. I love my Salsa bullet which is the same size and rechargeable.
This content is the opinion of the submitting contributor and is not endorsed by EdenFantasys.com