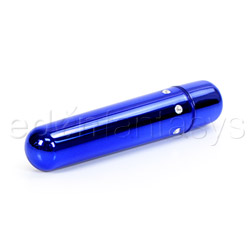 A Bullet That Takes REAL Batteries? Sign Me Up!

If you like powerful, pretty, bullets but are sick of short life from difficult to find batteries, you are going to love the Crystal High Intensity 2! It really has everything you could want from a bullet, but don't expect more power than a AAA and compact size can give you, remember, it doesn't plug into a wall. However, most people should be more than satisfied with the power it this one packs.
Pros:
Waterproof, one-touch shut off, AAA battery, powerful, incremental speed, pretty.
Cons:
Button needs to be pressed kinda hard to turn off, not super quiet.
Rating by reviewer:
5
extremely useful review
I genuinely believe, that if you have a clitoris and you get off by way of it being stimulated, you should own at least one quality, versatile, mulit-speed, powerful bullet. Really, such a simple staple that every woman should have. They are small and discreet, they play well with other toys, work during intercourse, have no wires, and I don't know about you, but my bullets probably get the most use out of any other toy, overall.

That being said, most bullet designs have several disadvantages. They are too weak, they run through batteries like crazy, and they take those insane button batteries or N-1's. Well... NO MORE, I SAY! Ladies and gentlemen, the Crystal High Intensity Bullet 2, by California Exotics. A lovely metallic coated, ABS plastic bullet that takes a single AAA battery. It has an O-ring to make it waterproof. The packaging tells me that I can get 8+ hours of play at the low speed and 4+ hours of play at the high speed. Now, that's a lot of play time, but I do use my bullet nearly daily, so I'll let you know. I can usually get a couple weeks out of an N-1, so I'm pretty excited to see how long this baby will last (I'll let you know in my follow-up).

Aside from that fact that this bullet takes a real battery, yet is still a diameter that will fit with most toys which use a bullet, another genius thing about this design is the "one tap shut off". It has incremental speeds, about three or five of them, which can be controlled by holding down the button, but it can be shut off instantly by pressing the button once. You do have to press it kind of hard, which can be great if you're using this with a partner and moving around a bunch, but not so good if you're trying to be super discreet.

The diameter is a little over 2" around (like I said, that of a standard bullet), and the length is 3.5", just a little longer than the high intensity bullet and about one-and-a-half times longer than a standard bullet (see picture bellow). It is adorned with 6 "real" crystals (I expected them to be plastic, they are in fact glass and pretty sparkly), and the button at the bottom glows red when it's on, and flashes as you change speed (which I find to be kind of pointless, but whatever). 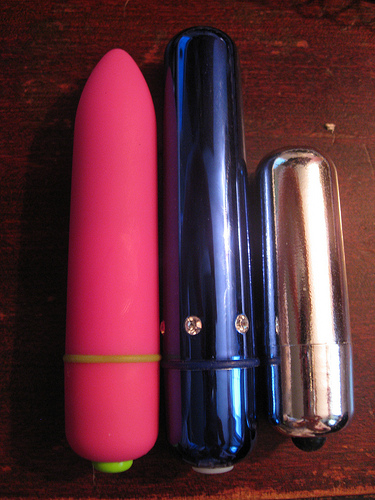 As far as power goes, I think very few will be disappointed. It's about as powerful as the high intensity bullet at their highest settings. It's more rumbley than most bullets, which tend to be more on the buzzy side, but I feel unless you need your Hitachi to get off, you should be able to find a speed that works.

Plastic is non-porous and doesn't collect lint or hair, but I would not share this unless you tied it up in a condom, it just has too many nooks and crannies for bacteria to thrive in. I also would not insert it vaginally for the same reason, unless again, you tied it in a condom. Please don't use this anally, it's not made for that and you'll end up in the ER. Wash before and after each use with soap and water, toy cleaner or 10% bleach solution. The insert that came with the plastic, lobster-style packaging suggests that you only use water-based lube with this and that you remove the battery when not in use.
Experience
This is my new favorite bullet, and will probably continue to be, especially if the battery life is as good as the packaging touts. I will probably end up getting a few of these as birthday gifts for friends this year.
Follow-up commentary   I still like it 8 months after original review
The battery life with this bullet is really good, it's compatible with other toys and it's pretty. I love it!
This product was provided free of charge to the reviewer. This review is in compliance with the FTC guidelines.