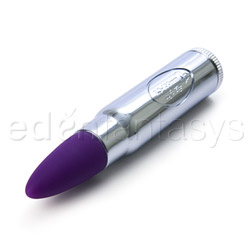 Bullet
by Rocks Off Limited

The RO-100 is a nice little bullet for a good price. Bullets in general don't usually pack much power, but if you're looking for something small to spice up your partner play without getting in the way, the RO-100 is a great choice.
Pros:
Cute Design
Waterproof
Discreet
Cons:
Tip makes precise positioning difficult
Vibrations lack intensity
Rating by reviewer:
4
extremely useful review

Prepare yourself for a slew of military puns the likes of which Eden has never seen! Like most bullet vibrators, the RO-100 soft tip bullet is designed primarily for external use. Despite its shape, it's not made for penetration (cue rim-shot). While it's considerably longer and a bit wider than most bullets we've used in the past, it hasn't the girth to be worthwhile for vaginal penetration, and as the pictures illustrate, there's no string of any type that would allow you to retrieve it should it venture too far inward.

For a little bullet, the RO-100 creates an impressive level of vibration. However, there are two facets of vibration you need to take into account with respect to all vibrators: frequency and (for lack of a better word) wavelength. I use frequency to describe the speed at which the toy vibrates, and wavelength to describe how much the toy moves during each vibration. The RO-100 is able to produce a very high frequency of vibration but a rather unimpressive wavelength. The end result tends to feel a bit more "buzzy" than the more satisfying vibrations created by larger and more powerful toys.

My girlfriend tends to prefer vibrations with a rather low frequency and greater wavelength (think the Hitachi Magic Wand's lower setting), so she didn't find the RO-100 particularly satisfying as a solo toy. However, it packs more punch than most toys of comparable size which makes it a great aid for use as a clitoral vibrator during sex. Yet another plus is that the RO-100 is 100% waterproof. Even enclosed in its case, this baby is small and discreet enough to be travel safe (although it might not look too good going through an x-ray machine at the airport, so be wary of that). Given its ability to perform under almost any conditions, I'm ready to dub this baby the Navy SEAL of vibrators.

The RO-100 is composed basically of two parts: the tip of the bullet and the "shell casing." The colored tip is made of a soft, high-quality silicone with a smooth, velvety texture. The shell casing, which looks shiny and metal in the photo and in real life, is actually a very shiny plastic. At the base of the bullet, opposite the tip, a colored silicone button protrudes from a recessed area in the base.

The surface texture of the silicone tip is decidedly more pleasant to the touch than the standard metal or plastic used for many bullets I've owned. However, the silicone is a bit too pliable and seems to dull some of the vibration. It isn't so pliable that it feels "squishy," but as the tip narrows, it becomes more and more prone to bending in response to pressure. However, the velvety surface texture on the tip is worth any vibration lost as a result of using silicone in place of rigid materials like plastic. Still, a more rigid silicone might improve the toy's performance. The materials had no smell or taste that I could discern, and because the toy is waterproof, the were easy to clean.

Aesthetically, this is one of my favorite toys. Sure, the 13-year-old inside of me that still wants to join the special forces is just stoked about anything shaped like a bullet, but my girlfriend thinks it's cute too. It's not something we're going to leave out to decorate the apartment, but it's a welcome break from the typical choice between sterile, phallic, or overly embellished designs. I'm not crazy about the big logo imprinted on the side of the bullet (you can see it as the oval in the product photo), but that's a small blemish on an otherwise cute and fun design which has the effect of giving the toy a texture that makes it less apt to slip from your hand during use.

One functional drawback to the design is that the silicone tip is so pointed that it is sometimes hard to keep the vibrations where you want them. Even during solo use, my girlfriend claimed that she was having a hard time figuring out how to position it, and the movement inherent to partner play just made the problem worse.

On the other hand, the overall size of the toy makes it easy to grip, even during sex. As you can see from the picture below, it's 4 inches long, which is about twice as long as a standard bullet. The extra length makes it much easier to grip and manipulate, particularly when your hands are covered in lubricant. Furthermore, the placement of the button in the recessed area at the base of the toy ensures that you won't accidentally push the button and change vibration pattern or turn the toy off by accident. 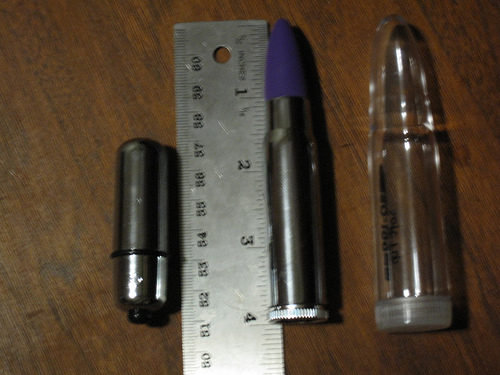 The RO-100 has three vibration settings: high, low, and a pulse pattern. To turn the toy on and cycle through the various settings, you simply press the button at the base of the bullet. To turn the toy off, you simply hold the button for 3 seconds. This seems fairly standard for a vibrating toy, but the placement of the button as well as the simplicity of the control scheme are a welcome break from many of the other multi-function vibrators we've used in the past.

There isn't a whole lot of difference between the low and high settings: typically a lower setting tends to accentuate the wavelength a bit, making the vibration feel "deeper." In the case of the RO-100, the "low" setting simply seems to be a lower frequency, which I didn't find terribly useful. The pulse pattern is a fairly rapid pulse: think 8th or 16th notes. Overall, I found that the high setting alone probably would have been sufficient, but my girlfriend seemed to like changing up the functions just to mix things up.

The button requires enough pressure that it would be hard to push by accident, but not so much that it is actually difficult to push. The controls are simple: push the button to change functions, hold the button for 3 seconds to turn it off. While it doesn't have the "locking" function some of the fancier multi-function vibrators have, the plastic case makes such a function unnecessary. The button is in a recessed part of the base, so unless you leave the R0-100 out of its case during transport, there's no chance it's going to be turned on accidentally.

I'm generally skeptical of vibrating toys that claim to be waterproof, but the RO-100 performed as well underwater as it did above. The end cap is a little prone to cross-threading, so be careful to make sure that you've actually screwed the cap on and created a good seal before using it under water.

As is always the case with silicone toys, you'll want to keep the RO-100 away from any silicone based lubes. Obviously the toy itself does not require lubrication as it isn't intended for penetration, but if used during sex, silicone lube could easily find its way onto the silicone tip of the bullet and cause a reaction.

Cleaning is a breeze as the toy is 100% waterproof. I stuck with my standard mild-soap and warm water formula, which was more than sufficient to keep the toy clean. The seam between the silicone and plastic is pretty... well... seamless. It seems as though the silicone on the tip may continue under the plastic sheath, and I haven't found a crevice or anything of the sort that might make cleaning difficult.

Although the toy is waterproof, I would recommend against boiling it or putting it in the dishwasher, as extreme heat can cause damage to the components of vibrating toys and, frankly, it just isn't necessary. While the bullet isn't meant for penetration, you'll probably want to clean it after every use and sometimes before, as stuff seems to stick to the silicone tip rather tenaciously.

The RO-100 only requires one AAA battery to operate, and thus far the battery performance has been impressive compared to other bullet-style vibrators we've used. Even with fresh batteries, I've noticed that some bullet-style vibrators tend to lose some of their juice during long sessions. The RO-100, on the other hand, went for over an hour straight without any reduction in power. We've used it several time since, and the same battery is still going strong.

While there's nothing particularly luxurious about the RO-100's packaging, it's the most convenient and well thought out packaging included with any toy I've owned. The RO-100 comes packaged in a clear plastic case shaped exactly like the toy itself with a screw-on cap at one end. It saves space, protects the toy from damage, and keeps it clean. 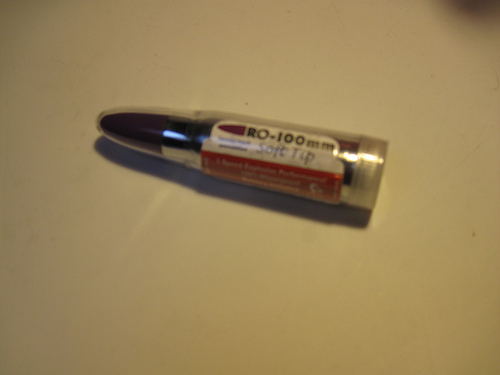 Reviewed by That Guy (Eden Advanced reviewer) What does all play and no work make me?
Rank
5.5
wrote 20 reviews
This review was edited by
Comments
Make a post
Forum
No discussions yet.
Thank you for viewing RO-100mm soft tip bullet review page!
Top