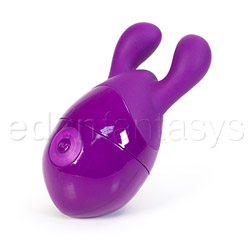 The Body & Soul Elation from Cal Exotics is a half way decent toy. The dual vibration points, multiple patterns, and waterproof design are definitely great things that it brings to the table. What really takes away from it is that the execution of getting to the patterns, and how much battery life it drains. It really seems like this should have been built with 2 AA batteries instead of 2 AAA instead. Overall its decent, but nothing more than that.
Pros:
Dual vibrating ears, mid level power, fairly quiet, different design
Cons:
bad battery life, bad button design
Rating by reviewer:
3
useful review

This toys is best used for a woman who enjoys pinpointed vibration on either the pussy or the breasts. This toy isnt too strong, but I would say it is above normal and very buzzy, yet fairly quiet all things considered. This toy is definitely I would use alone on the bed or in the shower for a quick one.

The toy's "ears" and button are made from silicone which of course felt very smooth. The rest of the housing is made of plastic. The toy had no smell what so ever, which is nice because ive had really bad smelling toys before. I would say that the silicone ears in themselves feel different than just having plastic bullets, so yes the texture did add stimulation. For this overall though, it would work well for a beginner to mid level user.

The design is a unique egg shape that I have not seen before and I did like it. The ears themselves both house their own bullets, so one can hit the spot while the other hits another. for me, I could push the ears together and hit my spot from both sides which really got me going good. The bulbs on each of the ears were a bit bigger than I would have guessed, so for some women, it may be a bit awkward, but I had no problem using it. This toy most people might think of it being some little egg shaped toy, so I would say you could probably get away with this traveling if someone saw it on the off chance.

This toy works great in the shower, which is a strong area for this little egg. It really did work great in the shower too. It has the standard 10 function patterns of vibrations to cycle through by pushing the power button. Batteries don't last too long either powering 2 bullets at once. Yes it is easy to use and understand, but its a bit annoying to cycle through the patterns with this design. To turn off the egg, you hold the power button in for about 5 seconds and it will turn off. The button itself is a bit hard to push by the way. The vibrations are located in each of the bulbs on the ears. It is slightly noisy too, but if your door is closed or you are in the shower, no one would know.

being made of silicone and plastic, it is best to wash with hot water and antibacterial soap here. You can use water based lubes only as well. To store, toss it into your night stand.
This product was provided free of charge to the reviewer. This review is in compliance with the FTC guidelines.