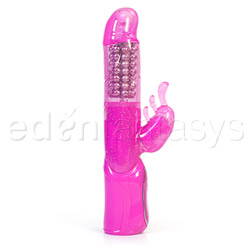 A new workout to build your forearm muscles ladies..and at the same time get off or get bruised!

While the clit attachment is amazing with its vibrating and pulsating features and the beads in the shaft massaging the walls of your vagina to pure enjoyment, there are some negative things that out way these. Those cons being the rotating head that hurts like hell and can bruise your cervix when inserted to the clit attachment. Also the weight, unless you plan on using this as a workout tool your arms will get tired after only a few minutes.
Pros:
A variety of functions, easy to care for, strongest speeds are powerful, easy to use
Cons:
weight, length from head to attachment, and may I say it again..WEIGHT
Rating by reviewer:
4
extremely useful review

My main issue with this vibe is the size, from the head to where the clit attachment is, is quite a distance apart. I found that when using this even though it didn't hurt at the time I was in some pain after. Between the deep penetrating and rotating head it left my cervix more than likely bruised and hurting. Also the weight on this baby is insane. I really wanted to be able to weigh it but it doesn't show up on my scale so I will try to give you a comparison so you can really understand how heavy it is. If you have a 5 pound dumbell pick it up or imagine on how heavy it is if you don't own one.. okay now that dumbell has the same heaviness to it as this vibrator! So unless you have some big muscles going on, using this vibe solo will be quite a workout and tiring after awhile!

Being hot pink or purple and looking like a penis leaves this vibe not to discreet, and even though you could travel with it remember your adding about five pounds to your bag! 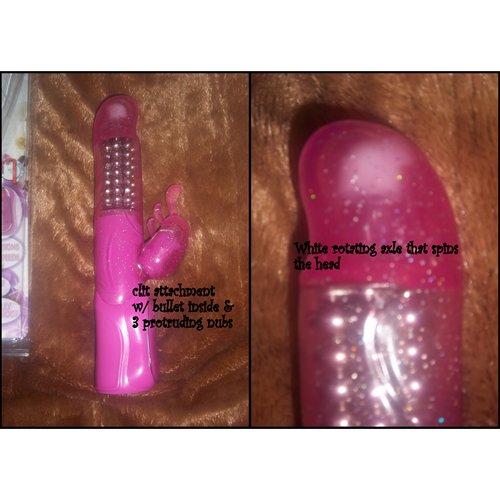 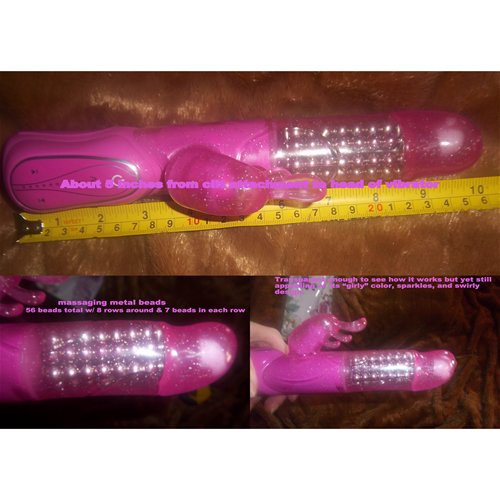 This vibe takes 4-AA batteries, as you can see in my pictures they are easy to install and replace when needed. While I found it to be painful to use I decided to leave the power on for an hour to see if it was a battery guzzler and to my suprise after a full hour of running both functions it still had the strength it did when I turned it on AND I have cheap batteries!
There are to different sets of functions that you can either use together or each alone seperately which I found to be impressive. So since the clit attachment is my favorite part of this vibe I will describe this one first.

~The clit attachment has 7 different functions that stem from a small bullet inside of it. Each function can be felt through the whole attachment, including the tips of each decending nub.
First~ Is a low vibration
Second~Is a higher speed of vibration( which tickles your hand when holding it from its high power!)
Third~Is a very high and intense vibration
Fourth~Is an esculation of vibrating and pulsing that starts weak and gets stronger for about 3 seconds and then repeats itself.
Fifth~Is a strong pulsating that stays at a steady pace
Sixth~Is a faster and shorter length of pulsating
Seventh~It starts out pulsating and turns into a strong vibrating.

~There are 6 different speeds to the shaft and head. Each speed spins the 56 metal beads inside and rotates the head around. The beads create a massaging feeling while the rotating head as uncomfortable as it was is meant to stimulate you as well.

I had read some other reviews stating that the vibrations from the clit attachment cannot be felt at the head of the vibrator but in my opinion with the one I have you can actually feel them very well. It might not be as felt with the lowest settings but with the highest vibrations and pulsating you can feel it quite well.
As I had mentioned I left this going by itself for an hour in my bedroom to see if it was going to eat my batteries, and since I have a young child that's curious on everything I stuck it under my blanket with the door closed( to eliminate his curiousity) and I couldn't hear it through the door. So as far as this toy being noisy for all the settings it has it is actually pretty quiet. 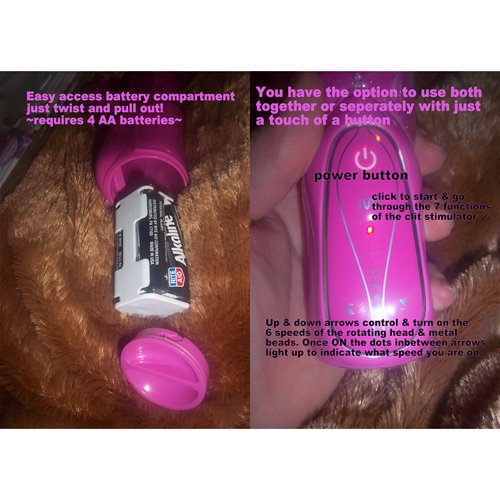 TPE material is easy to care for and can be cleaned with hot soapy water or with a toy cleaner, let air dry and then store in a dry place that's convienent for you. Even though it is waterproof and can go directly under the water it can not be boiled. So if you plan to share with someone your better off using a condom to prevent the possibility of not fully washing away bacteria.

Another great thing about this material is that it is compatible with any type of lube whether water based or silicone.

The Wild G vibe comes in an undiscreet clear package that folds open at the top. While it makes it obvious to whats in it you can use this package as temporary storage for it. On the back of the package it gives many qualities of the vibe in a few different languages along with some other useful information. 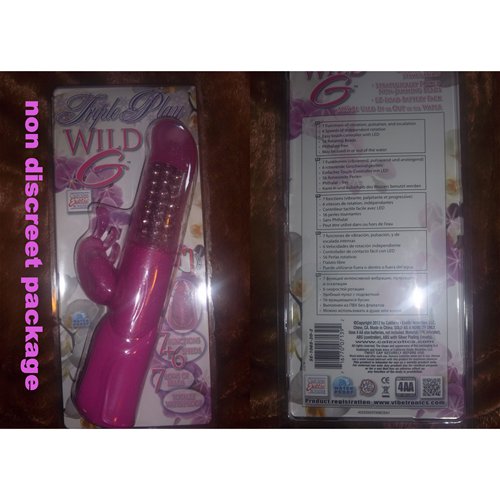 As pretty and appealing as it is I don't find myself using it again which is disappointing. In order to use the clit attachment I would have to insert it and in order to use the rotating beads the head would have to rotate too. Personally that was the painful part but that doesn't mean everyone will hurt from it, I might just be overly sensitive. Otherwise than that it is a great vibe. No weird smells to it, rigid plastic that you can get hurt off from, or any other quality problems makes this vibe well made .
Follow-up commentary   I still don't like it 2 months after original review
I have tried this rabbit a few more times after writing my initial review in hopes that I would change my mind about it, but unfortunately I still feel the same. My body does NOT like the rotating head as it always seems to leave me in pain and there is no getting use to it apparently. The weight?..well, I feel like I'm inserting a 5 pound dumbell into my vagina!
This product was provided free of charge to the reviewer. This review is in compliance with the FTC guidelines.