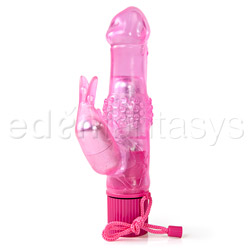 A Peter And His Rabbit

The Power Bunny by California Exotic is a traditional rabbit vibe and without all the bells and whistles (and price tags) of more complex rabbits, and would be a great intro to dual stimulation toys. The dual vibrators offer 5 great vibration patterns and PVC material is phthalates-free. While the internal vibration is a bit lacking, overall this rabbit is a great addition a toy box.
Pros
Dual motors, phthalates-free, 5 functions, waterproof, well positioned for clit stim, ridged head.
Cons
Can’t be sanitized, loud, vibration weak internally, awkward to hold, no off button, base gets hot.
Rating by reviewer:
4
extremely useful review
Mrs. McGregor would love to catch this one.

Here are the basics of the vibe itself. The fun parts are below.

When my Power Bunny by California Exotic|Power bunny arrived in its clear plastic shell, the first thing I noticed was the material. The PVC is a shade between bright-fuckin-pink and baby pink and is actually only a covering for the solid center of the vibe. The core of the Power Bunny feels and looks like jelly with a PVC sheath protecting your body from phthalates without the loss of jelly&rsquo;s pliability. I can tell this is the case because the head of the vibrator has about a quarter inch gap between the top of the core and the PVC covering making the outer layer collapsible. Other than being visually amusing, this wasn&rsquo;t a disadvantage on the function of the toy and there was only a slight child&rsquo;s squeaky toy smell to it.

The PVC is bendable, doesn&rsquo;t pick up lint, cleans with soap and water or any toy cleaner, is compatible with water and silicone based lubes, but cannot be sterilized so please use condoms if you plan on sharing. The thumb of a latex glove works perfectly over the rabbit portion of the toy for this purpose.

The Power Bunny gets its power from 2 AA&rsquo;s which are very easy to insert. The bottom of the vibe is one large button, which while making it easy to click, also means that while in use you can&rsquo;t apply pressure to the bottom of the vibe without changing the setting. That makes the vibe a little awkward to hold, and left my wrist feeling a little sore after a long session. I&rsquo;ll detail the 5 functions below, but I&rsquo;d say that the general power of the vibration is in the middle range. It&rsquo;s not a shallow buzz or a deep thrumming but it is quite satisfying. One common design flaw is that in order to turn the toy off, you have to cycle through the 5 functions until the end. Also, this is a loud bunny, with a distinct plastic rattle that can be heard through multiple doors. So if you&rsquo;re in a dorm, this probably isn&rsquo;t for you.

The ears of the rabbit are firm enough to carry the vibration extremely well. The internal portion of the vibe is not as efficient. With the bullet for the shaft located in the widest and lowest part of the vibe, I was unable to get any kind of real buzz on my G-spot from anything but the highest settings, but by then that was a little overwhelming for my clit. If the bullet had been placed in the head of shaft, this problem could&rsquo;ve been solved.

A nicely placed ridge on the rabbit side of the shaft provides for some lovely G-spot stimulation|G-spot stimulation gel and the wide head produces a very distinct pop when thrusting. There are shallow bumps along the bottom of the shaft that resemble stud piercings which I thought was really hot until they culminated in a small smiley face just beneath the head, which I thought was just silly. At the base, the vibe widens to a nubbed section that is wider than the head of the toy. The site has the head measured at 1 3/4&rdquo; and the nubbed part is just barely under 2&rdquo; in diameter which, while not huge, was a bit too much for me, but I never had to insert it that far to get clitoral contact anyway. The one other thing this rabbit came with was a nylon cord, which I assume is for hanging it in your shower or on your wrist if that&rsquo;s your thing. I know with me, if a toy works&mdash;it is not going to be a tidy experience and since the nylon is not the most sanitary thing in the world, I ended up just cutting the cord off.

Moment of Truth: Did the Power Bunny allow for simultaneous clitoral and G-spot stimulation? YES! And I have to say, I was surprised, as I hadn&rsquo;t yet found a toy that fit my anatomy, but this one did. The shaft isn&rsquo;t curved enough to get me off from the internal stimulation alone, but add that to a well-placed bunny and off I went&mdash;a few times. I would certainly recommend this to anyone looking to try out a rabbit for the first time, and to those who don&rsquo;t necessarily need a lot of internal vibration to find their happy place.
Experience
I really had a great time with this rabbit since it was the first dual stimulation toy that matched up with my body. I have a rather high sitting clitoris that faces forward more than downward&mdash;if that makes sense. The bunny was raised up high enough from the shaft of the toy to perfectly reach my clit once I had lubed up the head and settled it against my g-spot. I need lube for the initial insertion, but as soon as I turn on that rabbit, things start getting pretty slippery.

The vibration through the shaft wasn&rsquo;t anything special, as I said before. While using the head on my clit, I could only feel a little tickle. The rabbit ears were another matter. The ears are firm enough to transmit the vibration but not so stiff as to be rough against my skin when thrusting. With the vibe as flexible as it is, it was comfortable to bend the ears to just flick lightly against my clit to really tease or press it hard against me so I could grind my clit into the bullet while tightening around the vibe which lead to an amazing hip-bucking orgasm.

This is also one of the rare toys where I actually like and use all of the functions &ndash; they each work well for different stages from teasing to OH GOD YES, NOW.

The functions as best as I can express them:

5. bzz..Bzz..BZZ..bzz..Bzz..BZZ repeat
This product was provided free of charge to the reviewer. This review is in compliance with the FTC guidelines.