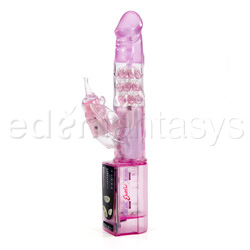 The Decadent Indulgence 3 is made of TPR material which is both soft to the touch as well as sturdy and able to support the movement of the shaft, beads, and elephant without tearing. The texture of the shaft is slightly veined with a realistic head. The top two inches of the shaft are soft and flexible but the three rows of beads in the middle of the shaft are more sturdy and feel like a hard plastic underneath the 'skin' of the vibrator. The elephant clitoral attachment has soft and flexible ears and trunk, with a firm clitoral motor underneath the body. The material is smooth and giving with the exception of the beads and should be agreeable to both beginner and advanced users. There is a very light rubber odor to this toy though it is not displeasing.

The design of the The Decadent Indulgence 3 is similar to most rabbit vibrators, with the exception that a elephant's trunk replaces the rabbit's ears for stimulating the clitoris, and the addition of three rows of beads in the toy's shaft which spin quickly as the shaft rotates in small circles. The design of this vibrator allows for maximum stimulation to both the clitoris and outer lips, as well as the g-spot. The shaft and beads spin around inside the vagina and can firmly and quickly stimulate the g-spot while the trunk brushes across the clitoris and the elephant's exaggerated ears and feet stimulate the labia. In one toy you can stimulate your entire vaginal region at once which makes the Decadent Indulgence 3 a great toy to try for all-in-one hand-held orgasm machine.

The Decadent Indulgence 3 is a multifunction rabbit vibrator. It has a rotating shaft with three rows of beads which can be turned on to spin clockwise for g-spot stimulation. There are ten speeds of rotation, for the shaft and beads, level one equaling approximately 100 rotations of the shaft per minute (without interference) and level 10 at approximately 140 rotations. There is also a clitoral stimulator attachment shaped like an elephant. The elephant's trunk is designed to quickly rub back and forth and vibrate across the clitoris while the feet and extended ears stimulate the labia. The elephant clitoral attachment also has ten speeds as well as five functions. The first function is a steady vibration, the second function alternates between fast and slow vibrations, the third function rises in speed quickly and then stops only to abruptly rise again, the fourth function gives three pulses or beats, with two short beats followed by one extended pulse, the fifth and final function is a quick beat repeated over and over resembling a gallop.

The TPR material is compatible with both silicone and water based lubricants, and cleaning it only requires warm water and mild soap. This toy till does attract dust so be sure to clean it before and after uses. There are four batteries in the battery pack located at the base of the toy; we recommend removing one before storage so it does not accidentally turn on and waste battery life.

Decadent indulgence 2
$92.99
This content is the opinion of the submitting contributor and is not endorsed by EdenFantasys.com