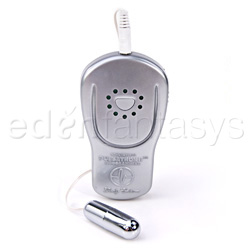 Other Pulsatron with slim bullet reviews

When I first took the toy out of the box I wasn't sure it was going to live up to my expectations. It looked a lot like the other vibrators that I had purchased before, except all my other vibrators had a dial control.

I love this toy. It's a bit noisy, but if you hold the vibe just right in your fingers (pinch it at the very top like you would be holding a pencil) and it dampens the sound a bit. Good god! This toy can go from 0 to 60 in about 2 seconds. The pulsating feature drives me wild - there's even a random setting on the vibrator so you can just sit back and let it work its magic. There are 7 different settings on the toy, each varying with strength of vibration, speed of vibration and pulsation timing. This toy will never get old - no matter if you're looking for minimal stimulation or something to blow you out of the water, this toy has it. The cord on the vibe is long enough so you can have it within hands reach to play with the settings on the controller. The controller for the vibe is a simple, single tap controller.

The only downside to the toy was after a few months the toy stopped working! I'm not sure if this is standard or if the toy was damaged to begin with. The wires that connect the vibe to the controller were somehow damaged and the toy is pretty much useless now and can be used as a paperweight. I'm still troubleshooting as to what may have gone wrong with the toy. So far I haven't had much luck. It was my favorite toy in my toy chest until this happened.

I'd like to see a similar toy put out by a different company that wasn't as fragile as this one. I guess the more wires and plugs you have, the faster the toy wears.

The battery life for this toy is one of the best that I've seen. I have a few other vibes that go through batteries in 4-5 play sessions (that normally last about 15 minutes). I can use the same pair of batteries in this for up to a month at a time!

Cleaning for the toy is easy - antibacterial toy cleaner will work just fine. Just make sure to take the batteries out before cleaning.
This content is the opinion of the submitting contributor and is not endorsed by EdenFantasys.com