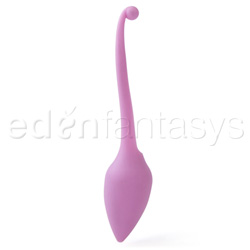 All in all, I'd say this is a great toy for any girl looking for something indulgent. It looks like candy and it's more satisfying than any sweet out there! Easy to clean, fun to use, and easy to get off with, this is the perfect toy if you're looking for something girly and portable.
Pros:
Visually appealing, satisfying, and easy to clean.
Cons:
Pretty buzzy as far as noise goes, marketing for product doesn't quite hold up in use.
Rating by reviewer:
5
useful review
This thing is painfully cute to look at, and it's not half bad to use either.

I tend to prefer clitoral vibrators to the traditional unrealistic penetrative vibe. The smaller and more pointed design of "bullet" style vibes are more fun for me, and they add to the stimulation I get from my vertical hood piercing. So I figured I could do worse than to test this baby out when I saw it in a local store (for twice the price, may I add).

First of all, this thing is adorable just to play with! The "tail" is soft and bouncy, and the texture is just plain nice. I took it out of the package as soon as I got in the car and immediately began to play with it, tugging on the stretchy tail and popping out the tiny bullet to play with the soft silicone head.

Once I got home and was able to put it to use, I found out one disappointing fact. Though the toy advertises itself as being insertable, while the tail is supposed to curl around and stimulate the clit with residual vibrations from the internal bullet, once it's in, the tail doesn't do much but help you take it out more easily. Personally, I like the tail as far as aesthetics go. I find that the thicker part of the tail, where it connects to the head, helps me point the vibrating part of the toy to where I want the vibrations to go. However, some people might be disappointed with the toys lack of following its own marketing.

That tiny bullet has held up nicely too. Though it isn't big, it has a pretty powerful vibration for other bullets of its size and shape, and carries very well through the thick layer of silicone around it. I was more than satisfied by it, and I haven't had an issue with it running out yet, either!
Experience
This toy is great for solo use if you're a chick who's into clitoral stimulation, and even better if you know some other chick who is. Since it's basically designed to be point-and-shoot, so to speak, this is a great way to manually stimulate your female partner without resorting to awkward, clunky rabbit vibes or tiny, slippery bullets that barely last a week before dying out. No batteries, easy to clean, and SO goddamn cute.

It stores away nicely too, so it fits well in a purse if you're going to a secluded location for a sensual picnic with your partner, or a pocket if you're running by a play party to pick up some cute little submissive for the rest of the night. It's aesthetically pleasing enough to actually make girls want to pick it up; it looks innocent and fun, and not scary. One could almost say it doesn't look like a sex toy, though it doesn't really look like anything else, either!
This content is the opinion of the submitting contributor and is not endorsed by EdenFantasys.com

My Eilium tags
About author