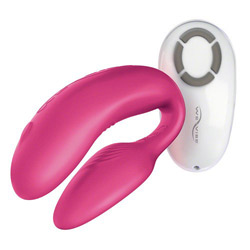 The We-Vibe 4 is wonderful in concept but fails to deliver in the bedroom.
It is uncomfortable for both myself and my partner, requires frequent readjustment, and the poor range on the remote control renders it useless.
A plain old bullet is a much better investment and will make you much happier.
Pros:
Variable vibration speeds and settings, rechargeable, easy to clean, attractive packaging and case
Cons:
Uncomfortable, needs frequent readjustment, poor range on remote control
Rating by reviewer:
2
useful review
This U-shaped vibrator is designed to be worn during intercourse. The spade shaped end is inserted vaginally to provide G-spot stimulation while the fatter end stimulates the clitoris. Vibrators in both arms can be controlled with a wireless remote or a button found on the external arm.
The toy comes with an attractive white case that doubles as a charging station. The charger is a USB, so you'll need an adapter in order to plug it into the wall.

Sadly, this toy isn't all it's cracked up to be. My partner and I have used tried this toy in different positions and with generous amounts of lubricant and have agreed that it is both uncomfortable and distracting.

I find that the ribbing on the inserted end is abrasive and quickly becomes painful, especially with more forceful intercourse. My partner has said that he also found it uncomfortable. The vibrations on the inserted arm are so weak that neither of us are able to feel them during intercourse. While the vibrations on the external arm are stronger, they're not strong enough to bring me to orgasm.
The toy also requires frequent readjustment and can slide out depending on positioning.
The wireless remote has poor range and needs to be near the toy in order to work. This makes it useless for play outside the house. Even though the toy does have a button on the external arm to change vibration settings, I found it a hassle to use.

But what I found most disappointing about this toy was that it detracted from the sensation of having my partner inside of me.

While it fails as a couples toy, it does make a decent solo toy. I find that the vibrations are too weak for me, personally, but it's a nice warm up toy during foreplay. Granted, if I wanted a solo toy, I would have bought a bullet for a fraction of the price and gotten stronger vibrations for it.

Overall, we're both very disappointed in this toy. It's not worth the price tag.
This content is the opinion of the submitting contributor and is not endorsed by EdenFantasys.com