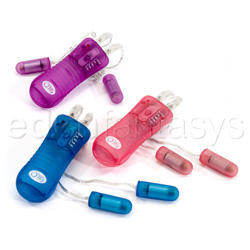 As Pretty as a Daisy

Another feature that I like about these bullets is they have a soft, velvety finish in contrast to the smooth, hard surface of most bullet vibes. The controller also has four different vibration settings that can be selected depending on how much stimulation you want. This means that you can turn them up well beyond the level of the original bullets and these vibrations can then be felt more effectively through the toy. The bullets can be independently removed from the controller so you can use either one or two at a time and I think they could be used with other controllers that have the same plug type.

There aren’t any of the different pulsation modes that some bullets have, but I’ve never found those to be worth much, so I personally wasn’t looking for that. The only major problem I have with the Daisy vibe is that the bullets cannot be independently controlled in case I wanted to use both of them but at two different vibration levels. I also could do without the wires, but I am willing to sacrifice for being able to use AA batteries (rechargeable if I want) and get stronger vibrations.
Experience
We have had these bullets for a while and have used them several times inside different toys and loved the extra power they provided over the original bullets that came with our toys. I have also used them on my partner’s clit and she enjoyed the feel of the velvet finish there. The vibration intensities are very pleasing and provide excellent stimulation. I do not consider them safe for anal insertion, so I have not made any attempt to test them in this way. Since they are made out of plastic, water, silicone, and natural oil lubricants are okay to use, just avoid petroleum based lubes. The fact that the bullets can be detached from the controller makes them easy to clean with soap and water or your favorite toy cleaner. They can’t be sterilized, so no sharing with any one you aren’t already fluid bonded with. These are great bullets that I highly recommend.
This content is the opinion of the submitting contributor and is not endorsed by EdenFantasys.com