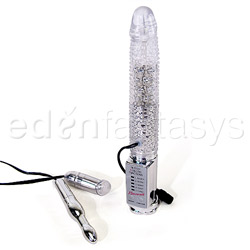 This toy sounds better than it works. When you turn it on and play with the vibe settings your mind races to think about how they all will feel. The settings range from the traditional vibe to one that mimics a shuttering orgasm. Put when placing it inside it feel short of giving me the pleasure I thought it would. The vibrations within are very weak and adding to that only the top half of the tool gives off any vibration at all. I could barely sense a rumble when it was inside of me. I only really received pleasure from the vibrator itself when I was pumping it inside of me pretty hard. Still kind of what ever.