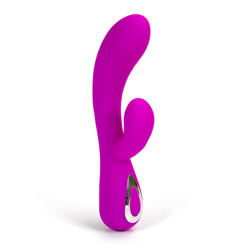 The curvature of the shaft is nice because it conforms to the shape of my body, but I have to angle it properly upon insertion to prevent discomfort. The toy's flexibility allows for a snug but comfortable hug with your clit and vagina. This feature is great because no matter how slippery wet you get, the vibrating shaft stays in place and won't slide out. And when angled the right way, the head hits just the right spot to give a fantastic G-spot orgasm. Combined with the clitoral stimulation it can't let you down.

As a beginner vibe, I think this is a great one. There are three vibration settings, the highest of which isn't too intense. For the more experienced users, it might feel a little weak. But for the price, it's still got plenty of kicks. It's also nice to have several pulse settings following the vibration modes, but a couple of them are only subtly different.

I tend to start out with the fourth setting. It is sort of a pulse wave that starts in the clitoral stimulator and transitions to the shaft and back. It is a bit like calm waves lapping against a beach, or the motion of a cat's purr. I tend to use that setting until I feel ready for penetration. Sometimes, I keep this setting, or I change to the third setting, which is the constant vibration at the highest speed. If I stayed using the fourth setting during penetration, I usually switch to the third right after, and then thrust the toy on this setting. I will occasionally use the other pulse patterns, but I don't usually use the first and second vibration settings.

What I also like is that during penetration, this toy is also small and comfortable enough to ride, usually on a pillow or bunched up blanket. The rocking motion combined with the double stimulation feels so incredibly good that while I tend to be quiet, I often let out quite a few moans.

The control pad is on the bottom of the shaft on the front. There are two buttons: one for power and one to cycle through the settings. You turn the power button on first and start the vibrations by pressing the second button. You have to cycle through all the settings or turn it off and on again if you want to go back to the first setting. The controls are simple and easy to use. The only problem is that sometimes you can accidentally switch the cycle or turn it off during play. However, the controls are not too complicated, and make it easy to change.

I would also be careful while plugging it to charge. To make it waterproof, the silicone covers the charging port. When you plug the charger into the port, the design creates a sort of condom for the plug, and if you poke too hard it will tear. I got my toy two months ago, and I tried to charge it without my glasses on in the dark. I poked the wrong spot and tore the silicone slightly, so now I have to make sure not to get that part wet and damage the toy.

The toy comes in a drawstring bag packed inside a bubble mailer. The label was discreet, as was the outer packaging. However, you could see the toy through the sheer drawstring bag once you removed it from the mailer. The toy did not come with instructions, but it's a simple enough toy to figure out so that instructions are pretty unnecessary. The drawstring bag was pretty flimsy, it ripped after just a few weeks, I wouldn't recommend it as your regular storage anyway.