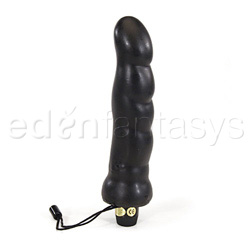 If you can forgive The Pitch Black for it's smell and sticky texture, it's a fantastic vibe. The size and shape can create some super hot orgasms.
Pros:
Size,shape,vibration,and stiffness are fantastic.
Cons:
Smell,Sticky texture, Needs a vibe in the tip, could be tapered more.
Rating by reviewer:
3
useful review
My wife Di and I thought it was about time we tried a toy that was suppose to mimic human skin and after reading the description of the Pitch Black vibe made of SensaFirm we decided to try it out.

The day the Pitch Black vibe arrived my wife was out of town for a while so I opened it up and checked it out. The first thing that I noticed; it was hard to ignore, was the strong rubber smell. Having had rubber and jelly toys before I was hopeful that it would go away after a few washings. Well no such luck. After we've used it five times and it's been washed at least ten times the smell is still there.

The smell aside, I checked out the Pitch Blacks other features. The size and weight are great if you're looking for a larger vibrator; 7 inches long and 1 7/8 inches at it's thickest point. The vibe is sculpted nicely with four large ripples down the back and larger bumps on the top that are placed so they give you maximum clit and prostate stimulation. The vibe only goes about half way up so using the tip for clit stimulation is pretty poor. We decided to try this vibe because it was suppose to feel close to human skin, well we're disappointed again. The Pitch Black is soft to the touch and flexible at the tip, but as far as feeling like skin, no way. The biggest problem I saw was it was very sticky even after numerous washings. It attracted lint and hair like a magnet so we had to wash it every time before we used it and because of the stickiness we also used a condom on it. Of course, using a condom is a must because SensaFirm is very porous and difficult to clean. Also make sure to use only water based lubes.