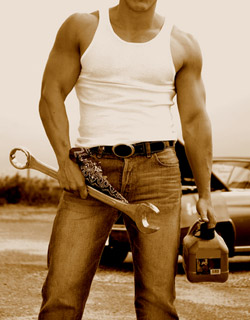 Guys – are you getting the maximum oomph out of your sex life? If not,
you may be missing out on the joys of a hidden part of your anatomy -
your p-spot.

"Yet do I fear thy nature; it is too full o’ the milk of human kindness"

Let’s play around with algebra for a moment. Oh, quit your harrumphing; this won’t take long. And it’s not gonna hurt you, either.

But did you know, that in boy algebra, the formula is a little more complex? Check this mad math: X = G + Y = P.

Let’s break that shit down, man-style.

X equals the variable, the object of all desires; the java applet of our besquinted eye. G is the aforementioned g-spot, a.k.a. the overdrive button of the female anatomy. Y equals the Y chromosome; the genetic pudding cup that makes men manly. As opposed to being womanly – or, as male scientists have asked for years; Y not?

And then there is the result, the précis, the denouement, the money-shot upshot of the whole damned (s)hebang: the P. Which, to break the suspense, is of course the prostate.

Okay – we’re talking to the men here. So listen up, guys.

What would you say if we told you that you have a Very Special Love Button – a button so special, that with just a bit of manipulation, you could experience some of the most prodigiously provocative orgasms of your entire life?

Forgive the Billy Mays-like infomercial introduction, but sometimes a smidgen of hyperbole is necessary. Fortunately, there’s very little hyperbole either. Also, we’re not trying to sell you any OxiClean, Orange Clean, or Kaboom Pro Wipes. This ain’t QVC, buddy – what we’re selling here is something you’ve already got.

As you’ve already wiggle-clicked your way to this article, you should already have at least an inkling of what we’re going to be talking about. But before we go any further, it’s time to come face to face with what for some people might be a hard truth. You, my male friends, have anuses. Gay, hetero, trans – it doesn’t matter – if you were born with a penis, you still have an anus…and just inside your anus rests a magical little adjunct called the prostate. You know, that thing your doctor’s so gung-ho about inspecting with a latexed digit every time you go in for a check-up.

Now it’s time for the next hard truth – and I’m talking specifically to you, hetero dudes of the intertubes. Putting something in your butt does not make you gay. You’re either born gay, or you’re not. ‘The gay’ is not like a mold spore or an errant Frisbee – you can’t catch it. Well, not unless you should happen to find a gay man hurtling from the sky, in which case you should totally catch him, assuming there’s no safety net in place.

Stimulating your prostate, regardless of the means employed, is not going to change your orientation. And the degree of your masculinity, machismo, or manly-manliness is not going to be altered or compromised in any way by enjoying sexual pleasure anally. You’re not going to turn into a girl; and you won’t be calling Rudy Giuliani for dress tips. (Well, maybe you will…rumor has it Rudy knows a good hemline when he sees it.)

Anyway, there’s nothing morally, socially, or psychologically Byzantine about this. You don’t have to study Foucault, Judith Butler, or Jacques Derrida. (You can if you like, but you don’t have to.) If it feels good, and you like feeling good, then go for it.

So are we, ahem, straight on that?

Good. Let’s move on then!

The prostate is the secret weapon of the anatomically male sexual arsenal. It’s so secret in fact that most men have absolutely no idea what its function is. (Let’s be honest here – when it comes to men, most of them have a sadly demented Don’t Ask Don’t Tell approach to what’s going on past the quavering pooch of their anuses.)

The prostate is a small, walnut-shaped gland located smack-dab between the penis and the rectum, right at the base of the bladder. And if you’ve ever had an orgasm, you’ve felt its sheer majesty, as it serves a multitude of sexual functions:

1. It secretes a fluid which lubricates the urethra (the passage that carries urine and semen) and protects sperm as it exits

3. It helps shoot forth the sacred nut (a.k.a. money shot, a.k.a. duckbutter), thanks to smooth muscle tissue which serves as a sort of seminal slingshot

Some call it the P-spot, or the male G-spot. Some call it the space cowboy, or the gangster of love. You can call it anything you like, so long as you call it. The more dialing you do, the more you’ll have to say afterward. But that’s just the tip of this Titanic-sized iceberg. Yeah; it’s straight ahead – but it won’t sink your boat – it’ll milk it.

As we discussed earlier, the prostate, whether you’re manipulating it or not, is already a crucial component to the male orgasm. But when you actually get in there and fiddle around with it yourself (or get your partner to!), you’ll be opening up a brave new world of orgasmic nirvana. This is the real milk of human kindness.

This, not philosophy, is “adversity’s sweet milk,” as Shakespeare had originally intended in Romeo and Juliet (Act III, Scene 3) – until his BFF Tybalt changed it.

And don’t let the name fool you – prostate massage isn’t as scary as it sounds. Maybe it’s partially because the prostate hasn’t yet taken its place on the mainstream pedestal of sex organs we have a greater appreciation and affection for. Take the penis – it’s got thousands of different terms. Same goes for the vagina. But the prostate…just the word itself sounds all…you know – clinical.

So let’s, at least for a moment, refer to it as the P-spot. Like the female G-spot, the prostate can provide the most intensely rewarding sexual responses imaginable. Also like the G-spot, prostate play by itself may or may not lead directly to climax. And even if it doesn’t lead unequivocally to orgasm, it’s still going to give you a white-knuckled joyride. Like cheese, it’s something that lends itself to as many pairings as there are stars.

And in case you didn’t know it already, there are at least as many stars as there are newfangled ways for you to get your nut off.

And as for getting to your P-spot nut-job, it’s easier than, well, pee!

1. Get all comfy-like, in a reclined position as comfortable as you can find. Relaxation is crucial to prostate massage, as the anus is a stress-sensitive muscle. Depending on your build, you might have to shift around a bit if using your finger – or if using a partner’s finger!

2. Get your jerk on! Or, get on whatever delight your partner’s got in mind – a lick, a stroke, etc. Not to climax, mind you; but at least enough to percolate yourself into a state of sexually high dudgeon. Keep in mind that prostate play, while exceedingly pleasurable, does not on its own necessarily lead to an erection. So if you’re looking to take this show to its final act, then manual manipulation is required.

3. Lube up. That means lube your finger(s) – or your partner’s; your anus, and possibly even your penis and perineum, if so inclined. It’s far better a thing to have too much lube than too little.

4. Relax. The anus is a stress-sensitive organ; only when you’re relaxed will it fully comply with your wishes.

5. As your anus relaxes, slowly insert your or your partner’s finger. Go slowly – there’s no rush here. Now, don’t be alarmed if you suddenly feel like you’re about to lose control of your bowels – this is a perfectly normal response at first. Just make sure that you’ve had a bowel movement within the last 12 hours or so, and you should be fine.

6. Crook your (or your partner’s) finger downward in a ‘come-hither’ gesture. An inch or two inside your anus, you should locate your prostate. It’s a small, walnut-shaped gland near the front wall of your anus. You’ll probably know when you’ve found it, as you’ll be feeling mighty good by then.

7. Experiment with different levels of touch with your finger against your prostate. You can work it back and forth in moderate circles, or press firmly (yet gently!) against it without rubbing. As with just about everything else, every single person is different – so explore, experiment, indulge – it’s your party; you get to set the rhythm here.

8. Put two and two together. While continuing to manipulate your prostate, begin touching your penis again. At this point, you have now entered the sexual cat-and-mouse game of How Much Can You Take Before Coming. Or, you can take the cat-and-mouse game further, going hands-free on your penis until you ejaculate from the prostate stimulation alone.

9. Do something equally nice for your partner. Or, if you’re alone, take a nap. You’ve earned it.

So – when we say lubricate both your finger AND your anus, we mean LUBRICATE THE HELL OUT OF THEM. Lubricate them until you’re more slicked-up than a mudslide at Woodstock. Give ‘em more oil than Dorothy gave the Tin Man. Seriously. This is supposed to be fun. So take this one little preventative measure, okay?

- Refill with warm water. NOT hot water; not even the temperature at which you wash your hands – we’re talking about some pretty sensitive tissue in there – there’s no need to scald it, right? That’s what we thought.

And the last step? Go get your P-spot on. Just get it on!

In Part Two of this article, we'll get into more advanced forms of prostate play - including how to introduce your p-spot to the best friends it never knew it had - toys!
Tags:
Views: 1973