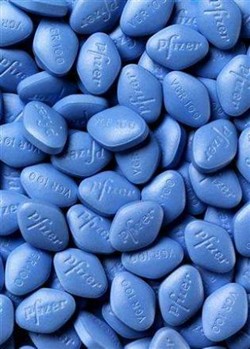 This week’s Pulse is dedicated to the tireless campaigning of our buxom British sisters, who spent the last several weeks battling clothing retailer Marks & Spencer on the issue of bra pricing. The chain added on a 2-pound ($3) extra charge for bra sizes DD and larger, which it claimed was necessary because larger breasts required ‘extra engineering’. And then all of Britain got in on the act: TV presenters (they call their talking heads “presenters”), newspapers, rock stars—and the Page 3 girls. And...the ladies won! So here’s to the buxom, the busty, the bodacious—because nobody can tell you your titties’ business.

Gentlemen, may we present to you...the PenisTron. It has wires. And magnets. And it wants your penis.

Pulse: Magnetized!
What We’ve Learned: That if you’re going to celebrate excess and self-indulgence, better then to celebrate the king of whacking off than some dude who gorges himself on hot dogs.

They call it art, but we know better: a German archaeologist has discovered a 35,000 year-old bit of pornographic art. The Stone Age carving depicts a profoundly Rubenesque woman with exaggerated breasts and labia. And she’s kind of a babe.

Playboy, the venerable masthead of male sexuality, airbrushed labia, and the random babblings of the late Norman Mailer, finds itself struggling, to the extent that the magazine is considering cutting its circulation as well as its still-monthly publication schedule.

Pulse: middling; we haven’t read Hustler since we were 7 and stealing them out of our friend’s dad’s basement.
What We’ve Learned: Isn’t Joe Francis supposed to be in jail?


The Week in Reactionism

It’s been a boom week for reactionism, as pageant winner Carrie Prejean was told that she’d get to keep her crown--and she made a new BFF: Sarah Palin. Meanwhile, people on every side of the debate bloviated endlessly and thoughtlessly, until another hole was punched in the ozone layer.

Tennessee, the land of Stetsons and...well, Stetsons, upped the ante on the doucheometer this week, voiding the 18 month old marriage of a transgendered couple which the state contends to still be men. Tennessee does not allow same-sex marriage; neither do they recognize gender changes, even after gender-reassignment surgery. They will, however, recognize your undying devotion to Toby Keith.

Pulse: teetering on high, because hot jealous monkey love makes the world go round.
What We’ve Learned: how to properly spell Tennessee.


The Week in Fulfilling Sex...Or Not

Did you know: atheists are having better sex than you! You know why? Because Richard Dawkins is fucking hung, man.

Pfizer, out of the goodness of their pharmaceutically-engineered hearts, is offering free drugs to the unemployed. So even if you get laid off, lose your home, your car and your life savings, you can rejoice in the knowledge that you will still be able to maintain a near-constant boner.

A new study by the University of Rochester explains that the pursuit of fame, wealth and beauty is a psychological dead-end. Well, duh. On a side-note, as someone who visited Rochester many times, I can safely tell you that there is very little fame, wealth, or beauty in Rochester, NY.

A Kenyan man is suing a group of female activists because they successfully convinced his wife to not have sex with him for over a week. This caused him to suffer a backache, a loss of concentration, and was in a foul mood all week. Cha-ching!

Pulse: a little high—Pfizer, can you help us out with that?
What We’ve Learned: that psychological dead-ends are fun!


And finally, this week's video: Ross Douthat with his immense, George Lucas-like neck beard, does some tap-dancin’ hatin’ for women on the Pill. And so, without further ado, Ross Douthat’s incredibly shrinking winky...