The Sexis Pulse: ED on the TV Edition 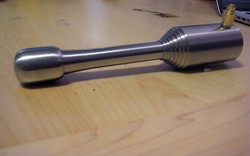 Taking the pulse of our cultural sex drive, one leaked semi-nude beauty queen photo at a time.

The Week in Male Enhancement

And what a week it’s been for male enhancement—though not necessarily a good one. It started off with Rep. Jim Moran (D-Va.) introducing legislation to ban all ED-related commercials from the airwaves before 10:00PM. We guess Virginia isn't for lovers after all.

Baseball slugger Manny Ramirez had an even more unfortunate run-in with the lords of ED this week, drawing a 50-game suspension for violating Major League Baseball’s performance-enhancing drugs guidelines. His drug of choice? HGC—a female fertility drug, also popular with steroid users as it helps smooth out the effects of a steroid cycle. It also helps with shrinking testicles and ED. One pill makes you larger, and one pill makes you small...

Let this be a lesson to us all: if you take steroids, you may become rich and famous—but your l’il winky will stop working.

Reason #639 why you should never participate in oral sex in a moving car: because another car might hit yours, as happened to a secretary similarly fellating her boss (while being tailed by a private investigator hired by the secretary's husband, no less). Upon impact, she bit down...and then the ambulances came. There's a joke about giving head in there somewhere, but we are taking the high road and trying not to find it...

What We’ve Learned: We’d better stock up on our reserves of Enzyte natural male enhancement.


The Week in Gay (and Beauty Pageant Melodrama)

Let’s quickly recap the saga of one Carrie Prejean, also known as Miss America: the pageant bought her new boobies. Then she squared off against Perez Hilton in the same-sex marriage ultimate fighting championship finals; enjoyed a number of skirmishes with Hilton and co., and now is fighting for her crown, as semi-nude pictures of her have begun to mysteriously, er, conveniently pop up on teh internets.

And if you’re wondering why we turn to pageant winners for our moral guidance, then look no further than Saudi Arabia, who just wbml-aol. There was no swimsuit competition, no ballroom-gown preening—in fact, no one even saw her face. But damn, is she a nice gal. (For the record, Perez Hilton was not on the judging panel.)

Maine has become the latest state to jump onto the same-sex marriage bandwagon, with Gov. John Baldacci signing it into law this week. Damn good thing too...the winters get awfully cold up there.

Florida governor Charlie Crist, the supposed Anakin Skywalker of the Republican Party (‘he will bring balance!’), is scheduled to be outed this weekend in the indie film Outrage. Outrage takes a look at politicos who may or may not be living in the closet...and then studies the disparity between their supposed homosexuality and their gay rights voting records. Let's just say that for a man named Crist, the good governor has not been terribly Crist-like toward his gay constituents.

Meanwhile, the Washington D.C. Council passed a bill to officially recognize same-sex marriages performed in other states. The lone holdout? Ex-mayor Marion Berry. Yes, the Marion Berry whose wholesome, Christian marriage involved cheating on his wife, hiring a sex worker, and doing enough blow to fill the Tidal Pool. Not that we're opposed to such things...but we're equal-opportunity hedonists.

Pulse: Flat. Can we stop talking about Carrie Prejean now?

What We’ve Learned: That we won’t stop talking about Carrie Prejean anytime soon. (Thanks in part to a an oft-unspoken law which mandates that all internet snark writers must fill at least 2 paragraphs per week with beauty pageant scandal snarkishness.)


The Week in Love Letters, Correspondence and Advice

Guys—have you noticed a really hot girl coming onto you lately on Facebook? If so, she may not be a girl at all, but rather a debt collector. And now with the result of the Fed’s stress tests, it looks like Citibank, Bank of America, Wells Fargo and company will be employing a great many more pretty faces to help them recoup their $75 million shortcomings. We suggest getting the cyber-sex done before the bill comes...

The daughters of last year’s failed GOP presidential ticket are still sniping away in their ancient battle for and against abstinence. Bristol Palin continued her 'stumping for mom' tour slash 'tour of abstinence-only sex-edumacation' with baby in tow, telling teens to abstain from having sex or else they too will suffer a plague of babies. Then a tea kettle was brought onstage, which Ms. Palin denounced as being black.

Larry Flynt on the other hand gets it. About 10 years ago, a pop-culture historian named Bill Geerhart pretended to be a child, writing letters to a potpourri of infamous figures, including Charles Manson, Allan Greenspan...and Mr. Larry Flynt. Just to see what would happen. His letter to Mr. Flynt here. And the response is here.

Pulse: 110. Memories of the Sears catalogs of our youth...

What We’ve Learned: Not to publicize our massive debt on Facebook.


And finally, a visit to the planet Koozebane, with the late, great Dom DeLuise...