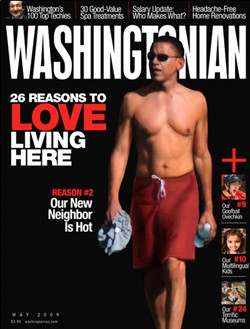 The Washingtonian
Taking the pulse of our cultural sex drive, one Casual Encounter at a time.

"In a completely sane world, madness is the only freedom!"

Sex in the Lost and Found of teh Internets

The New York Times, those egalitarian trumpeters of (their own) apocalypse, did the unthinkable this week when they rolled up their sleeves, amped up on their crazy pills (David Carr was not present), and launched themselves headlong into the wilds of Craigslist’s Casual Encounters. With their usual aplomb, the Times found the true heart of NSA sex: sweet-but-lonely dudes afraid that their FWB might stab them. Oh, and that’s where the prostitutes live—did you know?

Can you slur someone into weight loss and veganism? Not content with having offended half the world their veganesque screed Skinny Bitch, its authors have turned to taking on the Skinny Bastards of the world, with easy-to-chant phrases like “Soda is liquid Satan”. Hilarity, we're sure, will ensue momentarily.

And our winner of this week’s coveted ‘We Loved You Last Week But Are Really Mad At You Now’ award, we’ve got one Susan Boyle, worldwide singing sensation and loveable frump, who’s facing a bit of an internet backlash for the high crime and misdemeanor of...treating herself to a 35-pound ($50) makeover. Headlines like “Susan Boyle Backlash Begins”, “Susan Boyle’s got a new hairdo!” and “Say it ain’t so, Susan!” have been popping up like Les Mis-singing Conficker worms.

Pulse: 110. It’s been a stressful week: if we’re to believe everything we read, we’re being stalked by drugged-up prostitutes on Craigslist, we have to become vegans RIGHT NOW, and we must never—ever—dye our hair.

What We’ve Learned: Never judge an e-book by its Kindle...unless you buy a fancy new sleeve for it.

The Week in Love
It's been something of a rocky week for ol' Cupid. Andrew J. Cherlin, in his new book The Marriage Go-Round, asks the question "do we get married too much"? Not if you’re a part of 16 different poly vees like we are!

And continuing with the marriage theme, here comes the latest-n'-greatest tip to greater marital success: Don't have kids! “An eight-year study of 218 couples found 90 percent experienced a decrease in marital satisfaction once the first child was born.” To which we say—our parents were happy and well-adjusted...aside from all the constant shrieking and sobbing.

Over in Germany, the poor economy is pulling down the price of love, brothel-style. Yes, the world's oldest profession is the latest in a long line of good and service industries lining up for a little financial Viagra. So bring on the coupons!

Ladies: are you normal around teh dudes? (Survey says: "no; when I see a desirable man, the first thing I do is think of what eating disorder I can adopt next, provided that said eating disorder is currently en vogue. Then I read Glamour and Cosmo to tell me how to more expediently fuck up any chance at a decent relationship. Then I renew my subscriptions!" Meanwhile, ‘teh dudes’ are reading the same articles in reverse, courtesy of Maxim and GQ.)

And along similar lines: 25 Little Things Grrls Do that teh Dudes Love. Survey says: the interns at Glamour must have been really high that day.

Pulse: 82. We’ve decided to push our next wedding back to July.

What We’ve Learned: Sex coupons make the world go round!

Now playing in a bedroom nowhere near you: Mutsugoto, a new sex-ish toy for couples in long distance relationships. It helps them turn on their heart-lights!

Hot new sex accessory: bottle-opener heels. Perfect for that Craigslist hookup, a pick-me-up on the pole, or just for entertainment's sake. Thank you, Hot Topic, for retro Guns n' Roses-wear and for giving us license to continue behaving like hormone-addled teenagers! One question though: how to keep from spilling your drink?

It’s voodoo, man: man sends Twitter-tweet using only his mind, thus proving that one does NOT have to be completely brain dead to use Twitter. Somewhere, Darwin’s ghost is trying to figure that one out.

And, in case anyone was wondering, it is now known that sexual harassment by males prevents female bonding...in fish. So be nice to your tilapia.

Sex & the Law
The big news this week is that after years of legal wrangling, foot dragging, and other Bushy shenanigans, Plan B is finally on its way to being approved by the FDA for 17 year-olds. The agency has also been ordered to investigate further whether all age limits should be revoked as well.

Perhaps the most famous American sports bra of all time is currently being held ransom...by the government. Thus, in 40 short years, we’ve gone from bra-burning to bra-confiscation.

But the most important legal sex news this week is not a matter of public policy—it’s a matter of urgent Presidential buffness. This week’s issue of The Washingtonian features as its coverboy a shirtless, Photoshopped President Obama, with the caption “Our neighbor is hot”. That Skinny Bastard. And he’s not even vegan!

Pulse: 100—that’s what we can put up—$100 to ensure the safe return of the Bra That Almost Destroyed America.

What We’ve Learned: Well, it’s nice to know that we finally have a President who doesn’t need his own sports bra.


Video of the Week
An Early Look at the forthcoming documentary Orgasm, Inc. Bring on...the Orgasmatron???