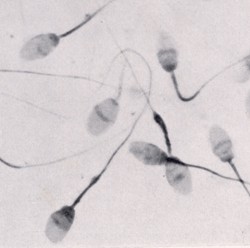 Taking the pulse of our cultural sex drive, one sexted-up acronym at a time.


The Week in Fashion
Here comes the smart-bra: designers are testing out a bra that automatically boosts a woman's cleavage when she's feeling sexually aroused. And, in opposite-related news, there's also a Chastity Bra out there, in case you want to go all Wang Lung on your boobies.

Pulse: anything with the words ‘cock’ and ‘bib’ gets our engines revved.
What We’ve Learned: that ball-slobber is a really pressing issue for the menfolk. We hadn’t gotten that memo.


The Week in NIMBY

Not in my backyard, Love Land: this past weekend, Love Land became the Love Land of the Lost, as it underwent a surprise visit from the wrecking ball. Oh, vagina dentata-like moral outrage!

Meanwhile, the British would like you to know that American feminists are drunken sluts. They fixed upon this final determination after a wistful morning of staring at Page 3.

Don't Ask Don't Tell claims its latest casualty: Lt. Colonel Victor Fehrenbach, after 18 years of service, finds himself being discharged from the military, 18 months shy of retirement--for the high crime and/or misdemeanor of being gay.

A Polish man, wanting to give his 14 year-old son a present he'd never forget, took him prostitute shopping recently in Great Britain. He pulled his car over in Nottingham's red-light district, let the boy out, and told him to choose his mate. The problem? The kid's choice turned out to be an undercover cop. Not in our backyard, weird hippy-dippy Polish dude!

Pulse: Cranky. No sex parks, our feminists have been demoralized, and Don’t Ask Don’t Tell has yet to go the way of the dodo.
What We’ve Learned: not to go prostitute-shopping in England.


The Week in Sperm and Ovum

A new study suggests that our moods can affect how sperm and eggs develop, thereby making a distinct chemical imprint upon the child to-be. Which means that our kids will be born with an excessive case of disassociative ennui, a love of hemp-bondage, and a harsh craving for a Zagnut.

In related news...some dudes’ moods must be really good—or they’re just flat broke: business is, ahem, overflowing for the world's biggest sperm bank, Denmark's Cyros. Something is spermy in the state of Denmark!

Menopause, the puberty gene, and the sexual clock, all melting like the Persistence of Ovum. Related: girls who menstruate early will be fat. There are days when reading 'new studies' seems an awful lot like playing Mad-Libs in the Hadron Collider: just throw 'em in and let the word-atoms collide—whatever comes out is sure to be golden...and fat.


The Week in Teen Sexting

Alternet calls the mainstream media out on the carpet for its sensationalistic, flim-flammy reportage (i.e., town-cryerism) about THE EVILS OF TEEN SEXTING. If any other generation had this capability when they were teenagers, they'd have done it, too. And it isn't going to blow up the world. So let's all chill out and have some guacamole.

Okay, so we’re not going to chill out. Obviously, teen sexting is rapidly destroying the moral fabric of the country, if not the entire world. So as a public service, the fine folks over at the Fox News affiliate in Atlanta, GA, have compiled a list of sexting acronyms that we should all be familiar with.

4. MorF means...
a. I am a changeling, therefore I morph
b. I am MorF, brother of WorF, son of Mogh, and a member in good standing of the Klingon High Council
c. Male or Female?

5. MOOS means...
a. that the clicking sound you hear is Sarah Palin reloading her Winchester
b. I likey Bullwinkle sex
c. Member Of The Opposite Sex


And to close out the week that was, let us for a moment consider Snuggie sex: