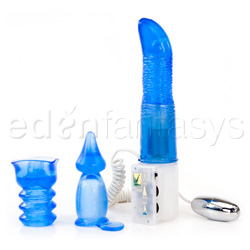 The Blue Delilah Gave Me the Blues

The description said it had a 5” circumference, but it didn’t feel that thick to me. The elastomer felt slightly stiff inside of me, and coupled with the curved g-spot tip, there wasn’t much give to the shaft at all. As yo what should have been a plus, it had a second dial for the vibrator to gyrate. I turned the rotations up to max speed, but the shaft barely moved. I could definitely hear it working, but I wasn’t able to feel it working. I thought maybe I was too tight and my muscles constricted the shaft’s movements, but when I took it out and held it in my hand the shaft barely wiggled.

Unfortunately, I didn’t love this toy. The only thing to love is that the Blue Delilah shares it's the name with a great song by an obscure Rockabilly band, Penthouse Playboys. Vibratex obviously puts a lot of thought into their toys, but this one was too subtle. While it had some great features; a bullet with a 5 ft long cord, an on/off switch, various speeds on the dual dial base, it just didn’t make it above 3 stars. The bullet didn’t vibrate enough for me, the shaft didn’t rotate enough for me, and it was just too loud for its obvious lack of power.
Follow-up commentary 7 months after original review
While I'd still only rate the Blue Delilah a 3, it doesn't mean that I don't appreciate this toy.

The Blue Delilah is simple and extremely hassle-free. It isn't difficult nor intimidating to use. While it lacks in power and is a bit too noisy for my taste, it's biggest plus is that it offers a bullet on a 5 ft long coiled cord. That's phenomenal! Do you know what that means for mobility? You could actually stick your vibrator inside of a nightstand drawer next to the bed and bring the bullet into the bed with you. If anyone were to walk into your room unexpectedly you could play as if you were just talking on the phone and had pulled the receiver under the covers because you were surprised. (Trust me on this one, I've actually done it and it actually works.)