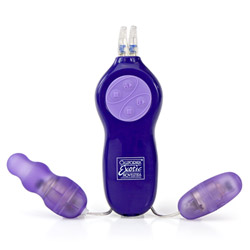 As I took this out of the package, I wondered, "Could this really give me an orgasm beyond any I have had using toys?" The bullet and probe looked really small, but I can tell you, they truly pack a punch! I really like the jack setup, meaning I don't have to have both of bullets plugged in; if one is getting in the way of my satisfaction. Each of them run on their own switches; giving you different speeds with each one to try and find what really feels good. You have your basic 3 speeds of high, medium, and low, plus the addition of 4 different vibration patterns; varying with pulsating and a wave-like feel. Another thing worth noting is the cords are very long. This is really wonderful; my partner can control the speeds at a distance as he drives me into an insane orgasm. Clean up is easy with warm soap and water, or use some antibacterial toy cleaner|Toy cleanser by California Exotic. It's so small, cleaning is quick for those in a hurry to get some pleasure.

After that, my partner and I decided to have sex. During sex, I noticed I was more sensitive; this resulted in a session more satisfying for me. Compared to the other times I've used to toys to stimulate before having sex, my orgasm was twice as powerful. I then decided to go another round a few hours later with the Passion bullet and mini-probe; this time with my partner in control.

He started using the bullet with the low setting, pushing it into me as far as my body would allow. Then proceeded to apply the mini-probe around my clit; slowly and gently rubbing around it; this was really getting me worked up. I was clinching and squirming around as he told me to hold myself back from cumming; which was a hard thing to do with this intensity. He turned it up to medium, then to high; using the speeds with both bullets. I couldn't hold back releasing myself, as I had one of the most powerful orgasms ever. The bullet shot of my pussy with such force and I squirted so badly. This experience using a toy during foreplay was the best ever!

The Passion bullet and mini-probe has no downfalls, at all! This had been the most satisfying and intense experience I have ever had. It is really worth getting if you have trouble with orgasms or just love intense sessions.

I give the product 5 vrooms; because the low setting feels much more like a high one, giving you an intense feeling. It also gets 3 Bees for being a bit noisy; not annoyingly so, but it can be heard. Overall it gets a rating of 5 Stars; I enjoyed this product and feel it has been the best ever!
This product was provided free of charge to the reviewer. This review is in compliance with the FTC guidelines.