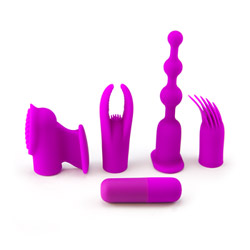 The attachments are made of silicone, while the bullet is made of ABS plastic that is coated in silicone. It fits comfortably in the hand, although if you have issues with grip or get lube on the bottom part of the bullet you may find it difficult to keep a hold of. That being said, it is rechargeable (what?! an affordable bullet that is ALSO rechargeable?) and it's completely waterproof. Personally, I hate the way it recharges, because you have to puncture the silicone. It is said to be "healing," but I still don't like it.

The Little Pleasures bullet vibrator not only comes with four attachments, but it also features ten vibration modes. I'm not going to attempt to describe them all, but it should be noted that they are all patterns and there are no steady vibrations. The vibrations are buzzy and may cause your hand or genitals to go numb if used for long periods of time, but they do travel well through the attachments. To turn the bullet on and off and to cycle through the patterns, there is a single button on the bottom that is flush with the rest of the bullet.

Due to the lack of steady vibrations, this toy did not work for me. I also dislike that the attachments stick to the bullet and are difficult to pull off. The attachments and the silicone part of the bullet attract dirt, lint, and hair like crazy - so I recommend cleaning them before and after each use. I love how strong the vibrations are, but as I said, this toy is not for me.
This product was provided free of charge to the reviewer. This review is in compliance with the FTC guidelines.

My Little pleasures tags
About author