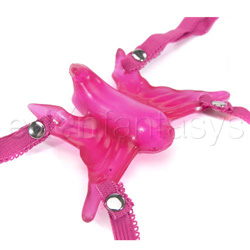 Still, once the box was stowed and the Monarch washed, I eagerly unraveled the bright pink, very stretchy straps and fiddled with them until I figured out what went where. It wasn’t difficult, really: the longest straps wrap around the hips, while the shorter sets wrap around the upper thighs. I’m not a particularly small person (about a size 12-14), so I was surprised to see that the straps fit without ripping apart or damaging the TPR silicone loops used to keep them attached to the toy. In fact, no matter how I moved, stretched or bounced, the silicone loops stretched without breaking.